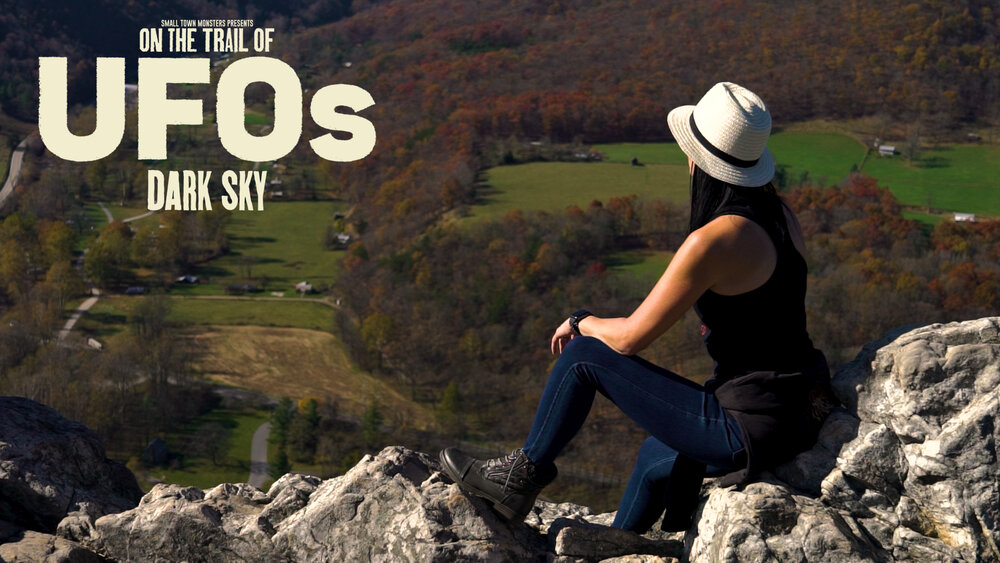 On the Trail of UFOs: Dark Sky is not what I was expecting from Small Town Monsters. Not exactly anyway. It builds on the formula established in the eponymous On the Trail of UFOs miniseries, also hosted and narrated by Dark Sky lead Shannon LeGro. I expected that.

They treat the witnesses and the stories with serious respect, without succumbing to credulity. They remain open to any story offered and seem keen to document them – as much folkloric archivists as paranormal researchers. I expected that too.

What I was not expecting, and was pleasantly surprised by, was the strong focus on West Virginia and the Ohio River Valley.

In retrospect, I shouldn’t have been. Breedlove hails from eastern Ohio and long ago established his Appalachian bona fides. Many of his films have focused on Appalachian cryptids, creatures, and stories. Three of those films with explicit UFO connections – The Mothman of Point Pleasant, The Mothman Legacy, and the Flatwoods Monster – are focused on West Virginia phenomenon. Even Invasion on Chestnut Ridge, which focuses mostly on Appalachian Pennsylvania in and around the town of Kecksburg, ventures across the border into West Virginia briefly. Breedlove notes in Invasion that neither the geographic Chestnut Ridge nor the strange phenomenon associated with the feature respect the state line.

Breedlove and crew do a good job of using West Virginia – and its gorgeous rural night skies – as a microcosm for the UFO phenomenon as a whole. They touch on possibilities as diverse as the extraterrestrial hypothesis (ETH), experimental military aircraft, and hollow earth theory – all put forward in various UFO literature as explanations for the phenomenon. They do this all, and put forward a film that should appeal to UFO enthusiasts from across the U.S. and around the world, without compromising the unique West Virginia flavor of the stories they collect.

They even have their own encounter with unidentified lights, and show just how hard it is to get good, convincing footage even with professional quality recording equipment.

As LeGro noted she has heard herself from witness after witness over the years, “you had to be there.”

The only part of the film that feels unrealized is a theory that Breedlove briefly toys with concerning UFOs and coal mines. He notes that a significant number of sightings occur in areas where there isn’t traditionally as much of a focus on coal mining, but that there is a coal mine within a given radius of the sightings. The fact that these areas are outside of heavy mining areas, but still nearby a coal mine isn’t surprising though. There are few areas in West Virginia that are very far from a coal mining operation of some sort, historically or modern.

The area I’d really like to see the team look into is the tie-in of sightings along the “chemical river” (the Kanawha River) near industrial sites there, and the sightings around other industrial areas up and down the Ohio River Valley. A good folklorist and sociologist could probably put together a nice piece on the intersection of anxieties surrounding the Cold War, modernization, and the unknown or misunderstood side effects of “a better world through chemistry.”

That might be a bit too niche or academic for this format. Or, maybe we’ll see Seth and company tackle it in a future film.

One thing I’ve learned is that I shouldn’t underestimate the STM crew’s ability to surprise and delight me. They’ve done it once again with Dark Sky, and once again I highly recommend you check the film out, on various streaming platforms beginning August 3.

One thought on “Late to the Game(s): On the Trail of UFOs Dark Sky”