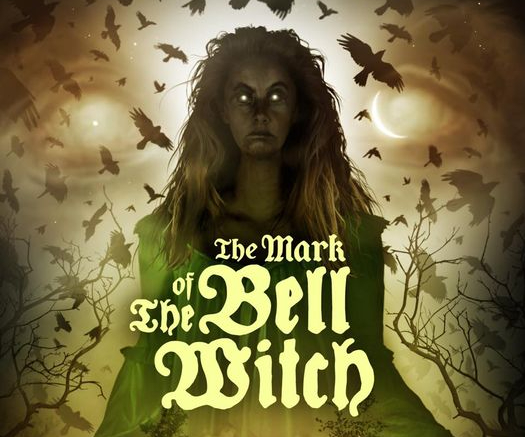 The Small Town Monsters films are all treats. Director, writer and producer Seth Breedlove has made some spectacular films on a wide range of topics, from Bigfoot (The Minerva Monster, Beast of Whitehall) to Mothman (The Mothman of Point Pleasant, the Mothman Legacy) to crashed and recovered UFOs (Invasion on Chestnut Ridge, the Flatwoods Monster) to werewolves (The Bray Road Beast). Along the way we’ve been able to watch Breedlove grow as not only a filmmaker, but as a storyteller as well, experimenting with different cinematic techniques and styles. In Momo the Missouri Monster, for instance, he worked at creating a less documentary style, casting longtime collaborator and narrator Lyle Blackburn as the fictional host of a late night B-movie monster series presenting the dramatized story of the Momo phenomenon, to entertaining but mixed effect.

With his most recent Kickstarter project, featuring the recently released Mothman Legacy and the soon-to-be-released Mark of the Bell Witch, he’s back in the mode of pure documentary filmmaker. But the lessons learned from those forays into other styles are on full display, especially in Mark of the Bell Witch. The film – one of the more comprehensive documentary treatments of the topic – uses a gorgeous mix of black-and-white dramatization footage and animation, along with commentary from local historians, folklorists, and Adams, Tennessee locals, to tell a compelling story that is both informative and creepy at the same time.

I found myself caught by a jump-scare at one point, bolting a little in my chair, something that was both unexpected and delightful.

For those unfamiliar with the Bell Witch story, it isn’t so much a witch story as it is an amalgam of odd and unexplained experiences – sometimes reminiscent of poltergeists, sometimes cryptids and phantom critters, sometimes ghost lights, spectres and haints. The story started in 1817, near Adams, Tennessee, when John Bell, a church elder, farmer, and landowner with 320 acres and ten slaves, took a shot at an unidentified animal that resembled a dog in some ways, but wasn’t quite right. That animal fled, apparently unharmed. But it wouldn’t be the last odd creature seen on the Bell land. One of Bell’s sons would see large unidentified birds, and a family slave, Aberdeen Bell, would claim to be threatened by a large black dog while coming home from visiting his wife on a neighboring farm. Aberdeen, or Dean, claimed that he split the animals head with a blow from an axe. But the next night, while making the same trip, he would see the dog again, this time with two heads and uttering terrible noises. Other phenomenon would follow, including the image of a hanged woman who disappeared and strange floating globes of light.

But it was the “witch” who haunted the family home that would steal the show and make the Bell family famous. The “witch” – a catch-all phrase for spirits, demonic activity, or hobgoblins used in the rural south of the time – started as scratching and banging noises before moving on to persecuting the family patriarch and youngest daughter with slaps, hair pulling, and other physical assaults, and eventually developing a full voice and holding conversations with visitors to the Bell farm. She would ultimately say her purpose was to cause the death of “Old Jack Bell” as she called the senior John Bell; a fate that occurred within three years of the onset of the phenomenon.

Though the phenomenon largely ceased with the death of John Bell Sr., with the exception of a promised return eight years following his death and three nights of interaction with John Bell Jr. at his home, it has continued to impact the area in and around Adams as other local legends have grown up around or taken on the veneer of the Bell

Witch story. A mirror legend similar to the Bloody Mary stories is told by young people around the small Tennessee community, for instance. There is also a tradition that if you take a rock from the Bell Witch Cave you will be cursed. A story of a 1950s automobile accident that resulted in the death of the driver, shortly after stealing the tombstones of John and Lucy Bell, is also told. According to that legend the tombstones were found in the trunk of the wrecked car and returned by the frightened and shaken parents of the teenage thief.

Mark of the Bell Witch does a fantastic job of weaving all these disparate threads together, along with the history and legacy of slavery and westward expansion in the early 19th century, for a compelling and creepy hour and a half of viewing. The film is helped along by the thoroughly spine-tingling score of composer Brandon Dalo, who has worked on other Small Town Monster productions, and the narration of Lauren Ashley Carter. Carter’s soft and comforting voice is the perfect counterpoint to the score and the subject matter. While many of the more recent STM films have used Lyle Blackburn as narrator, the decision to use Carter for Mark of the Bell Witch was a wise choice that felt right for the subject matter straight from the beginning. It was an unexpected but welcome change from Blackburn that might not have worked on any of the other films, but was perfect for this film.

I can’t recommend Mark of the Bell Witch enough, and hope you all find it as compelling and engrossing as I do when it launches on Vimeo, Amazon, and other streaming outlets, as well as Blu-ray and DVD, on December 15 of this year. Just in time for the 200th anniversary of John Bell Sr.’s December 20, 1820 death and the fulfillment of the Bell Witch’s curse.

For more information, look for Small Town Monsters on Facebook or online at smalltownmonsters.com.