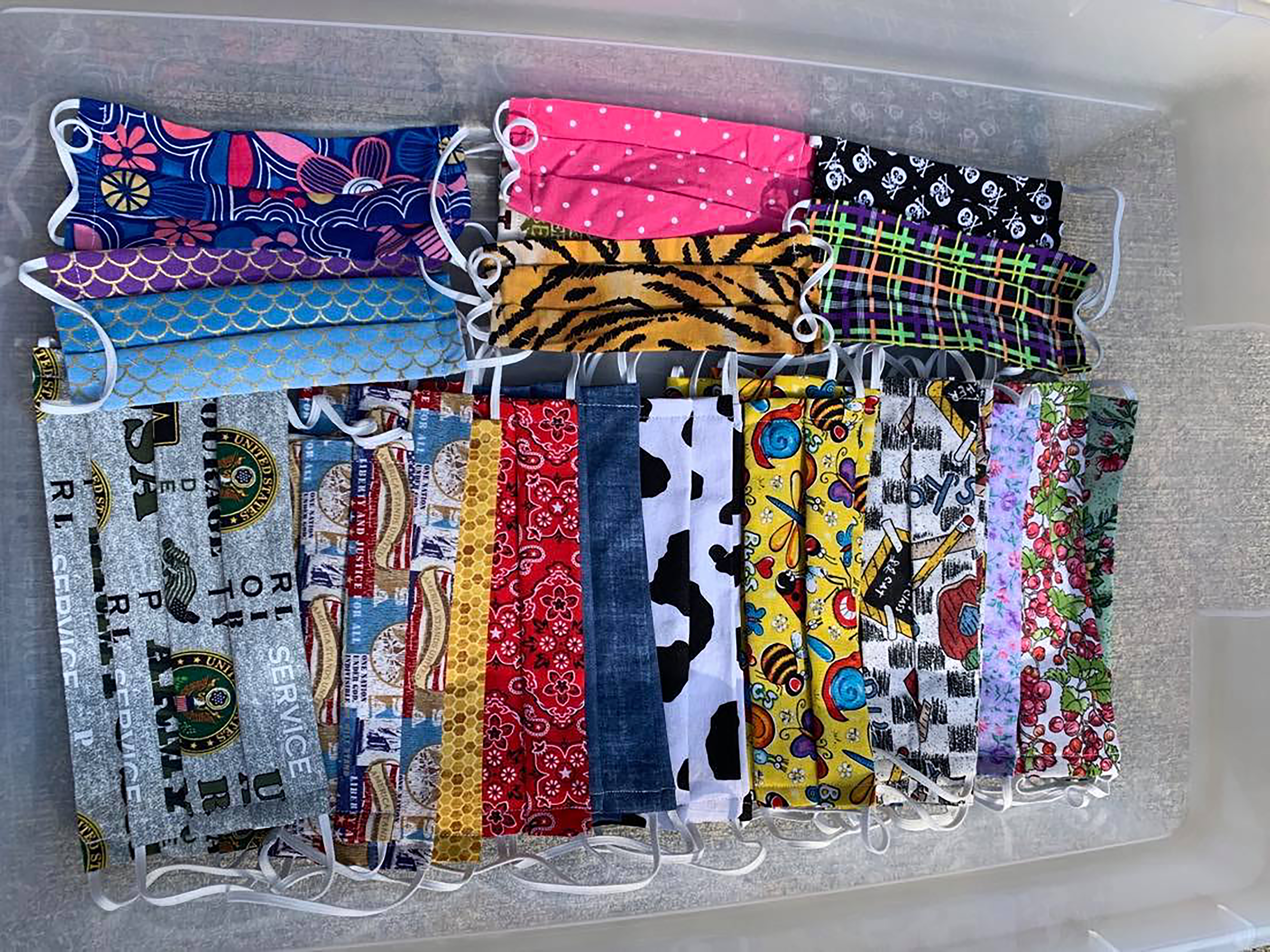 When the COVID-19 crisis caused schools to close early last year, Mary Jane Suttles, a teacher’s aide at Prichard Elementary, lost one of her main fundraisers for supporting a program near and dear to her heart, Love the Hungry. But while the pandemic might have closed one door to fundraising, it has opened another. Suttles is now giving away face masks to anyone who contributes to the charity program, which helps feed hungry people here at home and abroad.

“I started making the masks when the church (First Baptist Church of Grayson) asked anyone with sewing skills to make them for area nursing homes, essential workers, etc.,” Suttles explained. “I donated the first 50 or so. Then a coworker asked if she could purchase one. I told her I wasn’t selling them but I’d make her one. She refused unless she could pay me. She was the one that suggested doing it for a fundraiser.”

It helped fill a vital need for her charity work with Love the Hungry. While she had already made her donations for the previous year, fundraising for the program – which feeds hungry and malnourished children and families at home and abroad – is a year-round endeavor.

“Our biggest fundraiser at Prichard is selling snacks in the teachers’ lounge and since school was dismissed, that cut out the money,” Suttles said. “We had just had our annual pack two days before school was closed so we are starting on funds for next year.”

So far the mask program has been a resounding success.

Each meal distributed through Love the Hungry costs about twenty-five cents, but that quarter can make a huge difference in the lives of hungry children and their parents. Suttles first saw that impact, and became involved with the Louisville based charity, during a mission trip to Haiti after the devastating 2010 earthquake that hit the island nation.

” The earthquake is how I got started going,” she said. “My youngest daughter was at Morehead in nursing and the students went for a medical mission in August after the earthquake in January. I went to a packing event in Stanton, Ky that Children’s Lifeline was putting on. I was hooked. It costs 25 cents a meal, which doesn’t seem like a lot of money, but when you’re talking about doing 40,000 meals each year it takes some doing to raise funds.”

Since then she’s worked with Love the Hungry (formerly Kids Against Hunger – Louisville) to distribute meals through Children’s Lifeline and has gone on six mission trips to Haiti to help distribute the meals.

“We did our first packing event at First Baptist in November 2012,” she explained. “Prichard started in October 2015. To date, we have packed 524,706 meals. My first trip to Haiti in 2012 was through a mission called Children’s Lifeline. Dale Oelker with Love The Hungry, formerly called Kids Against Hunger, supplies them with meals.”

Children’s Lifeline also supplies meals to needy children here at home, feeding “2,700 kids a day at school,” she noted. They have other suppliers as well, and supplement their meals from Love the Hungry and other sources with beans and rice, but Love the Hungry still makes a huge impact for the people they feed.

“Love the Hungry supplies meals for many different organizations around the world,” Suttles said.

That has included, “over 50,000 meals for Kentucky and surrounding areas during this pandemic,” she explained in a Facebook post about the program.

Anyone interested in donating for a face mask can contact her through her Facebook post in the Carter County Citizens for a Better Way Facebook group, or send a check payable to First Baptist Church at P.O. Box 577, Grayson, KY, 41143. She asks that anyone sending checks to the church put Love the Hungry, or LTH, in the memo line of their check.

For more information on Love the Hungry, check them out online at lovethehungry.org.