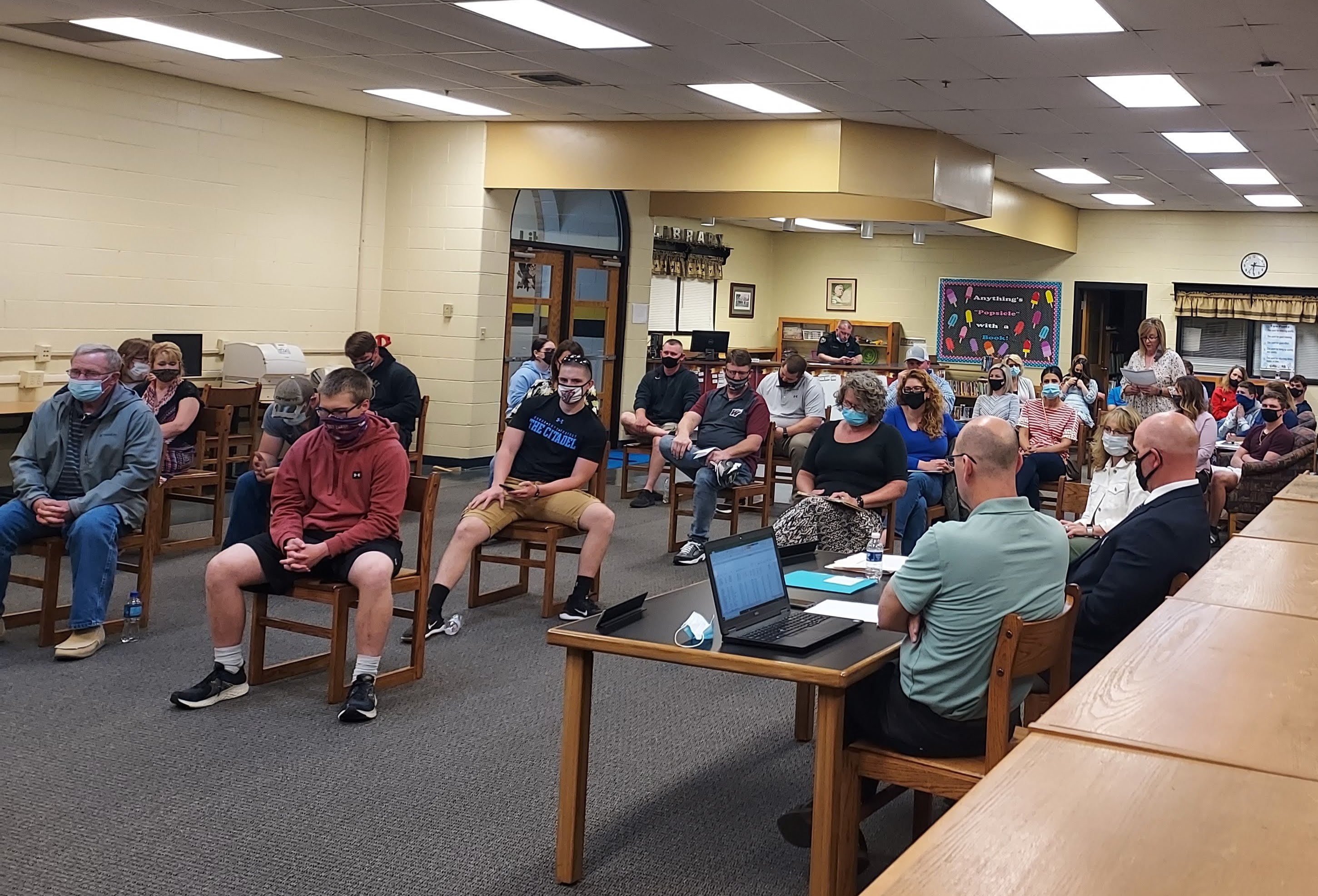 There were a lot of exciting things on the agenda for Monday night’s regular meeting of the Carter County Board of Education – a $1,000 stipend for all staff members, $17 million for a new Career & Technical Center, an increase in the number of tickets each graduate would be allowed for their family from four to six, two teachers earning their National Board Certification, and four students recognized as Governor Scholars.

That was all overshadowed, however, by the school board’s decision on offering a supplemental school year as provided for under Senate Bill 128.

That bill allows schools to offer students the opportunity to repeat the last school year at their request. While underclassmen who requested a repeat of the last year would have the opportunity to improve their grades, seniors would not be able to improve their grade point average. They would still graduate with their current class, and retain their current GPA. However, seniors who felt they missed out on valuable training or hands on experiences during the past year of virtual schooling would be able to make that up.

During the public comment period several parents and students spoke up about why they wanted the opportunity for a supplemental school year.

One parent noted that his son, who wants to be a welder, missed out on “booth time” that was needed to earn a certification. Another parent, who identified herself at “Patty” spoke of the benefits of holding back her own son early in his education and the increased maturity the extra year gave him.

The board, Patty said, should “allow these parents to make that decision for their own children.”

While the three minute time limit imposed on speakers by the board may have been necessary for everyone to have a chance to speak during the time available, it did make it difficult for some parents to read their prepared statements in full.

It was the voices of students, however, that had the greatest impact on those who supported approving the measure. Orry Perry, a senior at West Carter High School and the Career Technical Center, explained to the board that he missed out on time in his carpentry class and wanted to make up that lost experience. Perry, who played football for West Carter, said while some had characterized SB 128 as a “sports bill” to allow student athletes who are age-eligible under KHSAA rules another year of play, “this is not a sports only bill.”

He said his interest was in getting the full education he was denied because of the COVID pandemic.

“Just because I’m an athlete doesn’t mean I don’t care about my education,” Perry said.

Gavin Gibson, who also attends West Carter High School, said he would like to repeat his senior year so he can take advantage of the advice and guidance he lost over the past year. Gibson, who scored a 35 on his ACT test – a score of 36 is perfect – said while his score should help him receive a scholarship, he worried he had lost out on opportunities to solicit advice from his teachers about his university options.

“Without teachers there to talk to,” he said he doesn’t feel prepared to make decisions about or to begin college.

After hearing comments, and moving on with other action items, the board eventually voted three to two against approving the supplemental year. In total seven seniors and four sophomores from West Carter High School, one fourth grade student at Heritage Elementary, and one third grader at Olive Hill Elementary had requested the supplemental year. The board, however, had to approve all requests or none. They could not choose to approve some requests and deny others.

When a parent asked the three board members why they voted against the issue the board chair explained that the board had another item on the floor and couldn’t discuss that at the moment. After voting on their last item the board moved to adjourn without addressing those questions as a body.

Board member Rachel Fankell did state her concerns about approving the measure, though.

“I’ve got to be honest, our kids had an opportunity to come to school, and they chose to stay away,” Fankell said. “We only had 30 percent of the kids come to the high schools. We had kids who played sports, which was fine for them to play sports with the COVID, but then when it came time to go to school, they didn’t want to come to school because they wanted to wait until they got their COVID shot. That’s a double standard in my opinion. You play sports, you can come to school. I wish we could have come to school while they allowed the kids to play sports, and they didn’t. They had an opportunity, we asked, they had opportunities to go to the vocational school, and participate.”

Fankell, whose husband is a welder, said the welding students had one of the safest environments because of their isolation while working.

However a teacher at the Career & Technical Center, who asked not to be named, told Fankell this was not the case. Because of the reduced number of days and social distancing needs the normal five days of booth time was cut to two. Welding students got two days of the week, carpentry students got another two days, and the fifth day was reserved for staff only.

“I was there every single day,” the teacher told Fankell. “Those students were not allowed in school. Even the days they were allowed in school, they had to take turns in shop, so they only got two days inside of that booth instead of the five. Yes, there were weeks we were open the five days, but they only got to go inside of that booth two of those days. Because the carpentry class got to go to their shop the other two days and then we had a day, in the middle on a Wednesday, that was no students.”

In other classes, such as nursing where she has to track clinical hours, she said students who normally get up to 200 hours of clinical time “barely made the numbers” to qualify for state tests, and they earned that by coming in two hours at a time – the longest stretch of time they were allowed.

One student, “sat inside a classroom the entire month of April, and not one time did he get to go to that welding booth… because of something else that was out of their control. My students came to school. They were in front of me, for a normal school year would have been 225 hours, and some of my students barely got 75 hours.”

While they were doing virtual learning online, that doesn’t make up for the necessary clinical hours and hands on experience, she said.

“They were basically watching videos and answering questions. That isn’t the same as welding in the welding booth.”

Fankell asked why those students were showing up as virtual then, and the teacher explained that while they were doing virtual schoolwork, they were also showing up at any classroom time available.

Another teacher noted that disinfection protocols for tools, including up to four loads of laundry a day, limited the number of students who could participate in hands on activities.

When asked why the board hadn’t heard from the teachers prior to the end of the meeting about these issues, the teachers responded that they hadn’t had the time or opportunity to talk with the board because of the same COVID restrictions and distancing that led to online board meetings.

“This is where we meet, and we were allowed three minutes to talk about this,” one said.

“None of them showed up at the informational meeting for this,” another added.

Perry, who began his remarks to the board with a list of schools that had approved the supplemental year, said after the meeting that he “was hoping for, obviously, a different decision.”

“I thought this was a decision that should have been left up to the parents and to the students, and they took that out of our hands,” the senior carpentry student said. “They decided that they knew what was best for us, without even knowing who we are and what our education looks like. That to me is an issue, but I guess that’s just how it is.”

“I missed out on about 14 months of in person instruction on a carpentry career path that I’m not prepared for. But none of them cared about that.”

Gibson said it didn’t “make any sense” to him how they could rule on the issue “without giving us any reasons whatsoever, after we’ve given so many reasons why we wanted it, why we would be able to use it, and how we would benefit from it. It just doesn’t make sense to me and I’d really like to know the reasons why.”

Both young men said they did not feel they had adequate access to the board prior to the meeting, with Perry stating he had emailed his district representative “16 times” in the weeks leading up to the meeting with no response.

Rather than allowing all students to apply for the Carter Virtual Academy, only students with an approved medical condition will be allowed to opt out of in person instruction and choose a virtual learning environment.

“I just think, if we don’t get back in school, we’ll lose a generation,” Superintendent Ronnie Dotson said of the amendment to the virtual academy requirements.