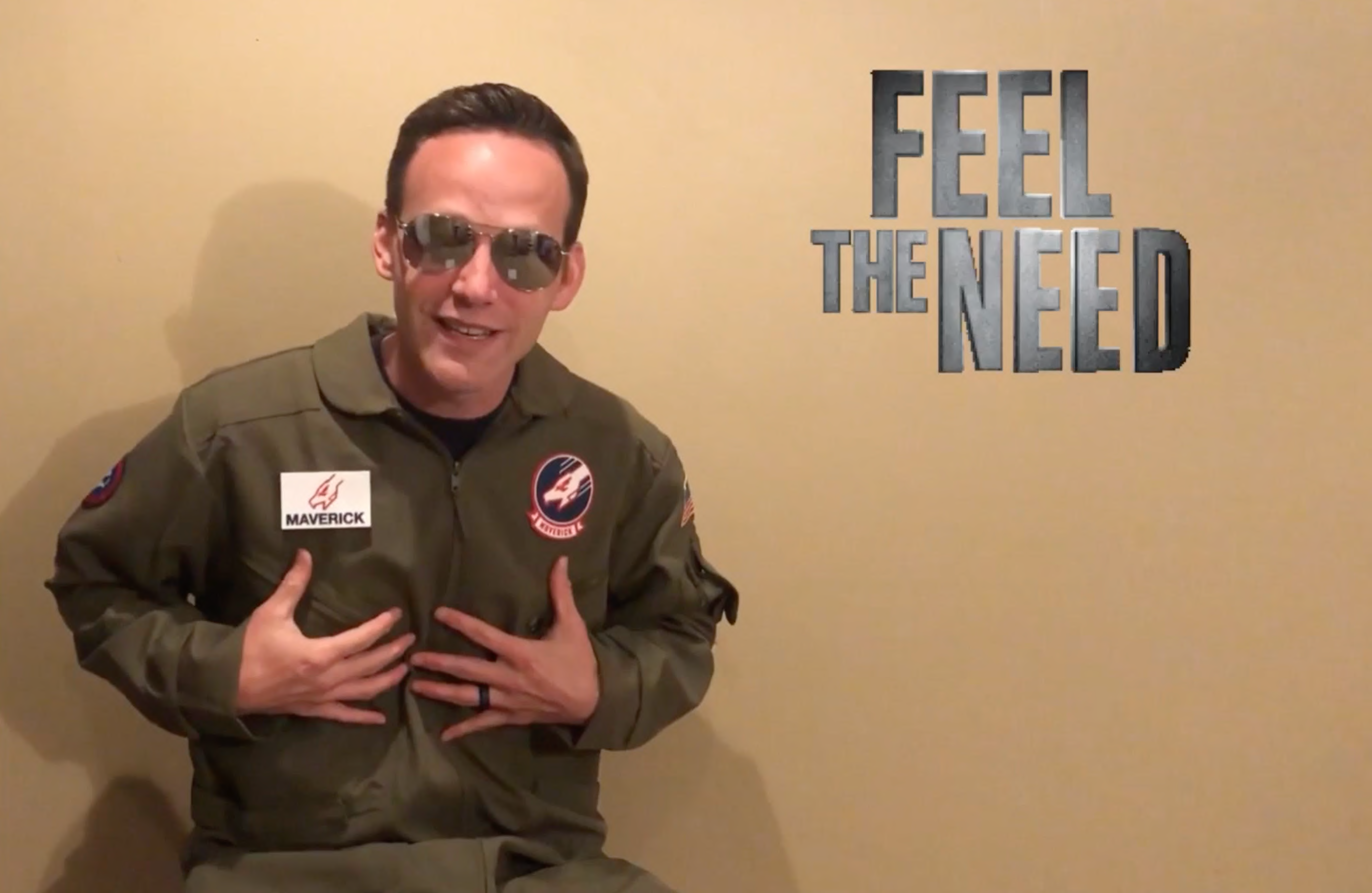 Although the ceremony wasn’t in person, a video was sent to each recipient with a welcome from Dr. Lisa Allen, dean of the School of Education, who thanked them for the job they do and their impact on students in the coming years.

She said the teachers have become better at what they do as a result of the technology they learned and used, and she expected the teachers to just keep getting better.

“Teachers are vital in the lives of students and families and society as a whole,” she said.

Shad Lacefield, a 2007 Campbellsville University graduate, who is a fourth-grade teacher at Garden Springs Elementary School in Fayette County and who has been featured on TV stations in Lexington due to his innovative teaching, was the guest speaker. He has taught in Kentucky, Missouri and China.

Lacefield, wearing sunglasses and coveralls with the name Maverick on them from the movie “Top Gun,” spoke of his teaching methods and his goal to make his students smile during the pandemic, which he said was hard on him, teachers, students and their parents.

He said, “misquoting” Tom Cruise as Maverick in the movie, “I felt the need. The need to make kids smile.”

He dressed in different costumes each day (over 120 in all!) and presented lessons in costumes pertinent to his subject matter.

He said the costumes didn’t always work because students would smile while on Zoom, but when doing their independent work, the students weren’t as excited.

So, he relied on Darth Vader from Star Wars to help him.

Dressed in a Darth Vader mask with a face mask underneath and in the black costume with his light saber, Lacefield decided to choose two students each Monday who had finished their work and turned it in for him to visit. He called his visits #vadervisits.

At their home visit, he played whatever socially distanced game the students wanted, varying from rock climbing, roller skating, drawing with sidewalk chalk and playing Harry Potter themed yard Yahtzee, which he even created a custom scorecard for.

He got those “miles of smiles” during those 50 Vader Visits. He said he missed those in-person smiles, and he decided he wanted to continue the costumes when in-person instruction began.

His everyday costumes aren’t as elaborate in person now, but he does show up once or twice a week in full costume to coordinate with the students’ lessons.

He urged the teachers to make the students smile in their classrooms to have a great culture and climate.

“I encourage you to think of fun ways once a week to make your kids smile, and, if they are smiling, I know you as a teacher are smiling too,” he said.

He said teachers could have given the students one of the most awful and horrible memories of their educational experience but, “I know the teachers watching this took time to make the best quality education we could give them. And for me, I’m going to think I was successful because of all those smiles.”

“I want to salute you and thank you for being a ‘top gun’ in your field. I want to thank you for all your hard work, I know your kids are going to remember you forever,” he said.

Lacefield has taught and coaches in kindergarten, first, second, fourth, seventh, eighth and ninth grades. He is the co-creator and director of the Do Something Extraordinary Golf Program in Lexington whose goal is to bring new experiences free of charge to low-income students in Title I schools, including free lessons, clubs and clothing.

Since its creation in 2017, this after school club has grown from one school and 10 students to three schools and 40 students.

Lacefield lives in Lexington with his wife, Whitney Morgan Lacefield, a 2008 Campbellsville University graduate, with his three children: Hannah, Caleb and Ella, who have many costumes in their home.

A total of 4,368 Kentucky teachers have been honored since the program began in 1987 with assistance from Earl Aaron and the Ward, Cundiff, and Aaron Memorial Fund. The purpose of the program is to recognize the quality teaching and learning taking place in the school systems throughout Kentucky.

The Excellence in Teaching Awards program is in partnership with Lexington’s CBS-affiliate, WKYT-TV.

The teachers are selected by their school districts in each grade level (preschool/elementary, middle and high school).

Whitt, of Grayson, KY, has taught first grade at Heritage Elementary School since 2012.

She received her elementary education degree from Morehead State University in 2011, and her master’s degree in reading, writing and teacher leadership from the University of the Cumberlands. She is a 2007 graduate of East Carter High School.

She is married to Shaun Whitt and they have two children: Averie and Harper Whitt.

She received her Master of Science in Mathematics from Murray State University in 2005. She is currently earning a degree from the University of the Cumberlands. She is a 1993 graduate of Elliott County High School.

She is the daughter of Judy and Charles Barker of Olive Hill, KY. She has two children: Kady Lewis and Taylor Patrick.

She formerly taught at Rowan County Senior High School from 2011 until 2014, and at the School of Creative and Performing Arts (SCAPA) from 2010 until 2011.

She received her bachelor’s degree in Secondary Education from Bicol University in 2002, her Bachelor of Science in Electronics and Communication Engineering from Aemilian College in 2007 and her Master of Arts in Mathematics from Western Kentucky University in 2015. She is a 1998 graduate of Talaonga Nat’l High School of Sorsogon, Philippines.

She is the daughter of Rogelio and Ma-Consuelo Valin of Sorsogon, Philippines. She is married to Samuel Thompson and they have two children: Patrick and Charlie Thompson.

Campbellsville University is a widely acclaimed Kentucky-based Christian university with more than 13,500 students offering over 100 programs of study including Ph.D., master, baccalaureate, associate, pre-professional and certification programs. The website for complete information is http://www.campbellsville.edu.