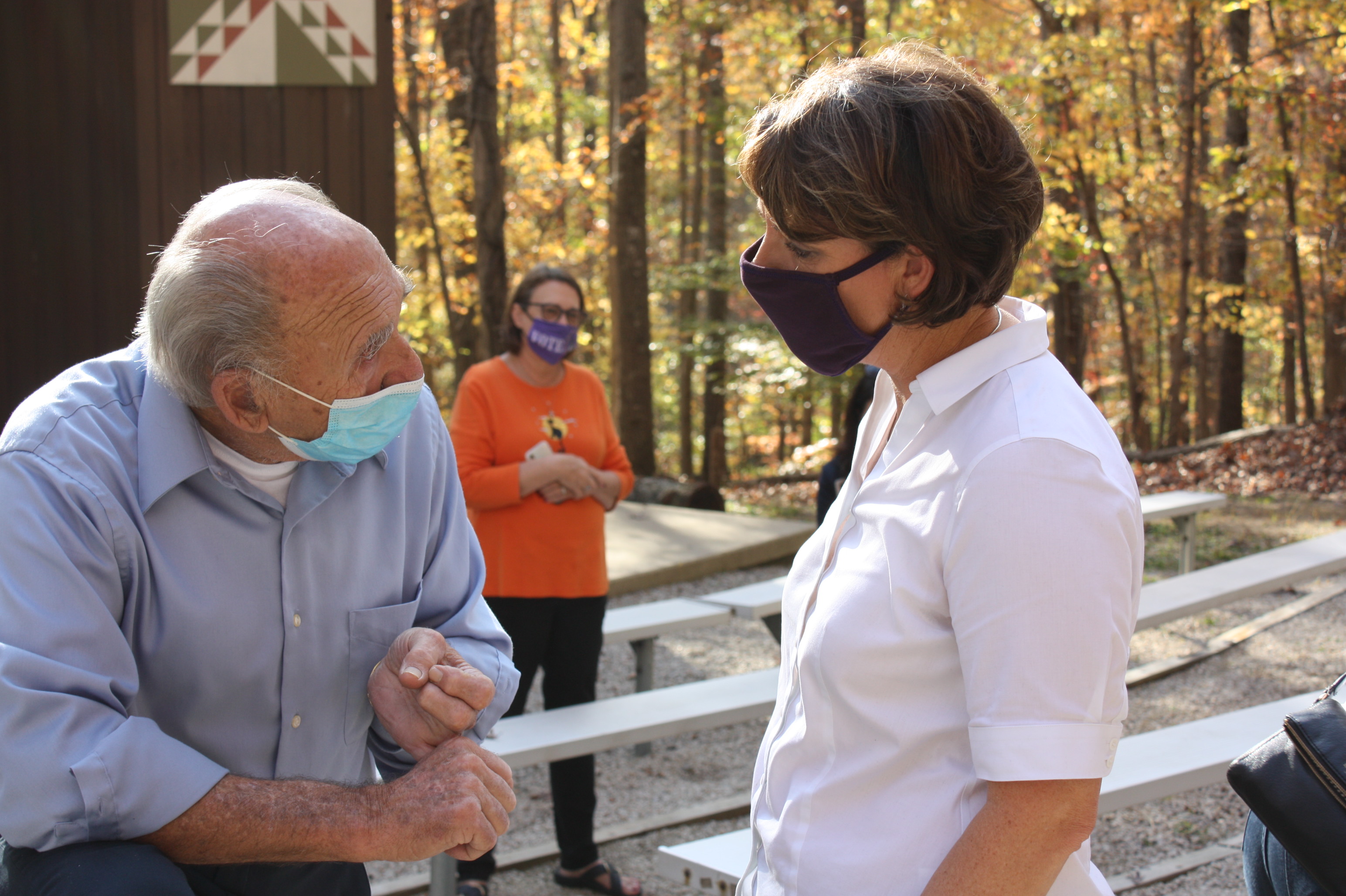 “I married a lifelong Republican,” Amy McGrath told the crowd who came out to Carter Caves to hear the Democratic candidate for senate speak. “But we’re Americans first.”

That message, on service and rebuilding a United States Senate that worked together for the good of the American people, regardless of political party, was the gist of the former Marine fighter pilot’s campaign stop in Carter County last Friday. It was also the substance of her criticism of incumbent Senator Mitch McConnell, who McGrath attacked for letting legislation lie on his desk rather than acting on bills that could benefit Kentucky and the nation. McConnell, she said, only seemed to act on bills when they benefited him, his party, or his political donors. She also criticized the system that allowed McConnell to take “dark money” from those donors without revealing who they were.

“We don’t know what person… or even what country they are coming from!” she said.

She promised to be transparent about where her funding was coming from and to act on any legislation that would benefit her constituents, no matter what side of the aisle that legislation came from.

“I can promise you, every piece of legislation that comes across my desk, I’ll ask, ‘How does it benefit Kentucky?’” she told the crowd.

One of the areas she said she’d like to focus on was infrastructure investment, both replacing and repairing outdated infrastructure as well as what she called “21st century infrastructure” such as improved internet access and cell service. These projects, she said, would both improve quality of life and create much needed jobs for Kentuckians and other Americans.

McGrath mentioned Republican President Dwight Eisenhower’s interstate highway project, which created jobs and improved transportation, as a model she’d like to follow. Eisenhower, she said, didn’t wait around to see how the project could benefit him or his political donors but moved forward with a project that benefited all Americans. She also noted that cities across the nation and across Kentucky have failing water lines that are 50 years old or older, in some instances, that need replaced.

McGrath also answered questions from the Times about her support for a woman’s right to choose. As a Christian, she said, she didn’t want to encourage abortion as birth control. But, she added, she also didn’t want to take away a woman’s and her doctor’s right to decide what worked best for them, especially in medical emergencies. She said she felt the number of abortions could be decreased by working to increase access to healthcare and birth control. Late term abortions specifically, which are often the result of health conditions that threaten the life of the mother and the baby, could be reduced by improving access to prenatal care, she said.

McGrath also gave her support to state representative candidate Kathy Hinkle, who was at the event.

“It’s not just about Washington, we have to change Frankfort too,” she said.