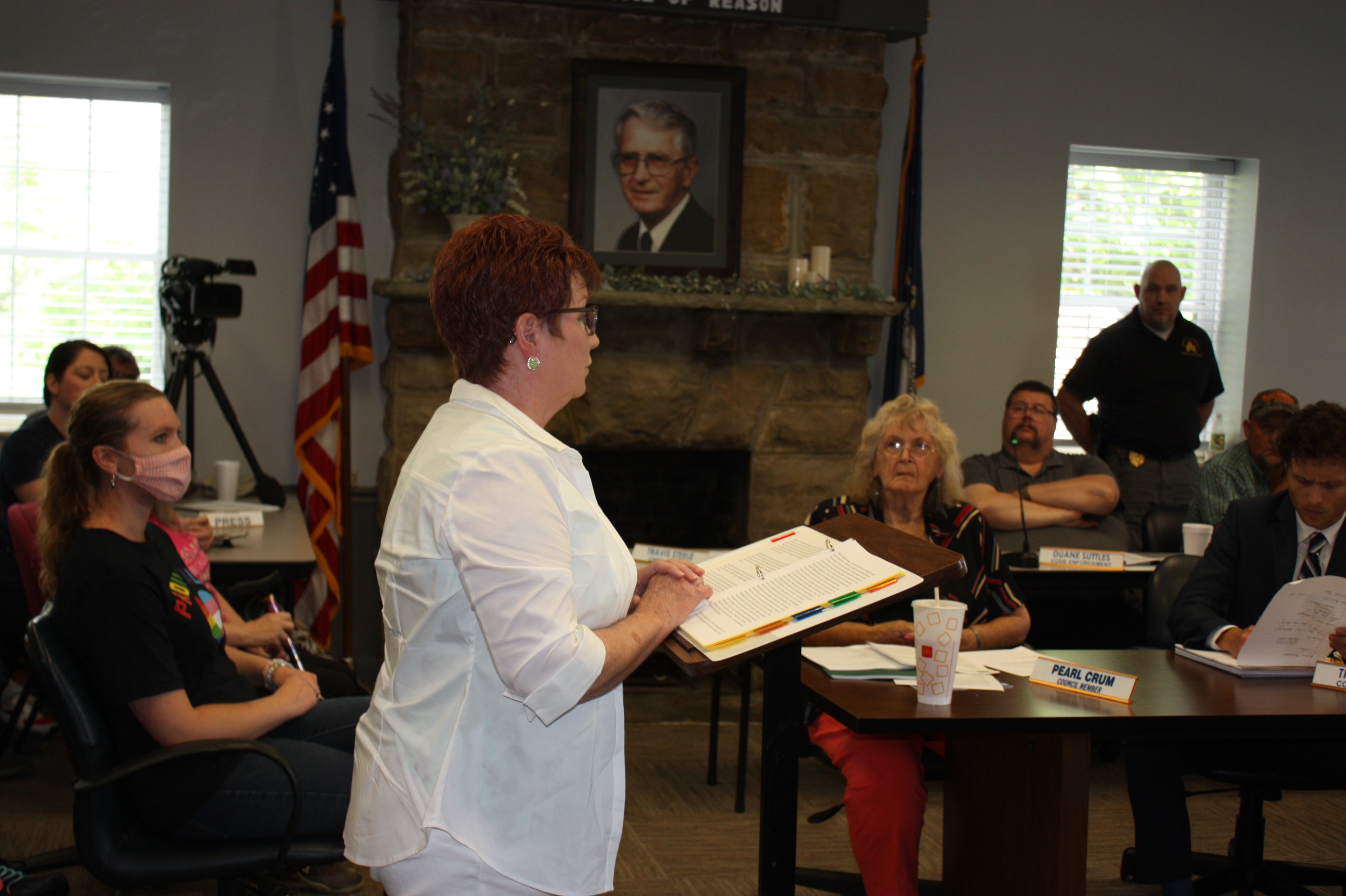 According to Bretta Aukerman, not only did the Grayson Gallery violate several city ordinances with their Pride month art display and drag performance, but they violated the innocence of an unidentified young man that Aukerman called “Jimmy.” According to Aukerman, although she never went inside the gallery to see any of the event, she said she watched “Jimmy” walk from the gallery to the car lot across the street and back again several times. When she eventually talked to “Jimmy,” whom she described as around 12 years of age, she said he told her his family had brought him to the event. After the dancing started, she said, the young man was very uncomfortable and told her he was “looking for a corner to hide in.”

“His distress was so obvious,” Aukerman said, before claiming that the dance performance at the event constituted “sexual abuse,” and that the gallery and the dancers had “stolen his innocence.”

“We know he has been victimized,” she said.

She said she wanted funding for the gallery withdrawn permanently, calling it her “mean mommy” solution, and said no one would be harmed if the gallery was “forever prohibited” from holding such events.

She wasn’t alone. She was backed by other individuals who spoke to Grayson council last week, claiming the performance and art exhibit was a violation of their Christian beliefs because it promoted a homosexual lifestyle.

However only one of those individuals said they were present and inside the gallery on the night of the event. Pastor Mark Griffin, of the New Hope Church of God of Prophecy, said he had been to the gallery many times for other events, and that it was “wonderful what they’ve done (with the gallery in the past)… but they’ve take a turn for the worse.”

It wasn’t just critics of the gallery who showed up to council meeting, though. Those who supported the Pride month exhibit also had their voices heard.

Sherman McMain, who described himself as a Christian, an AmeriCorps educator, and a member of the LGBTQ+ community, sought to clear up some of the misconceptions he heard from critics throughout the first half of the meeting. He explained that despite Aukerman’s claim that a cover charge is required in other cities to keep youth from seeing “adult performances,” cover charges are actually used to pay the artists. There are 18 and up restrictions on most venues for adult performances, he said, because those places also serve alcohol. He also clarified use of outdated terms, and stated that the lip synch, dance, and cirque style performances at the gallery were not adult themed or obscene.

McMain also noted that while religion had been invoked many times, and that he was a Christian who agreed with some of the statements made, the First Amendment provides for both freedom of, and freedom from, religion. No one, he asserted, can force others to abide by their religious convictions.

He also noted the important role the gallery plays not on the one night of the year it hosted a Pride celebration and art show, but in promoting arts opportunities and appreciation in the community the other 364 days of the year. He said while many of the individuals spoke about the impact of drag performances on the youth, they failed to acknowledge the art programs that the gallery offers for students throughout the week. He said events like the Pride art exhibit were important too, for older students who might be gay, bisexual, or transgender because of the high rates of suicide among LGBTQ+ youth. Knowing that they have a place where they can belong and find support, he said, could sometimes be the difference between life and death.

Desiree Lane, with Ashland Pride and an organizer of the gallery show, said they let attendants know when the performance would begin, and that it was up to parents to decide if their children were mature enough to enjoy the show. She said the show represented the diversity of the region, and that the reaction of the individuals who came to complain was not indicative of all churches in the area. She said several area churches reached out and participated in their Pride family picnic – a family friendly event for all ages. She said the gallery should not be punished for giving a platform to LGBTQ+ artists and performers.

“Dan and Mindy (Click) are wonderful people who love their town,” Lane said.

Jesse Marshall, a teacher in the Carter County school system, said her high schools students are growing “more diverse by the day,” but she appreciates that no matter their background, orientation, or identity, the events at the gallery “are inclusive” and “give all students a chance” to participate.

Marshall said she saw some of her high school students at the event. She said she also talked with some of the drag queens and drag kings who performed and some told her they had changed their routines to be more friendly for all ages.

She also thanked the city for the small amount of funding the gallery receives from them for their utility costs and lent her support to continued funding of the gallery.

“They do a lot with the little funds given,” Marshall said.

Councilman Troy Combs spoke directly with Aukerman as well, asking for clarification on some of her complaints and telling her while he wasn’t sure any ordinances had been violated, council would take any violation of ordinances seriously. Combs told her that a permit was not required for the Pride event, because it was not a special event, but part of the gallery’s regular Final Friday events.

He also asked Aukerman if she saw any proof that the “unmarked containers” she said she saw people carrying in contained alcohol. She could not provide any proof, noting again that she never entered the gallery to confirm any of her suspicions about the nature of the entertainment or the actions of the crowd.

One of Aukerman’s complaints was that, while she saw several city police officers and state police cruisers drive past the gallery, she never saw any officers stop or go in to make sure the gallery was not violating any ordinances.

Police Chief Travis Steele noted that his officers had not received any complaints about noise or other violations – despite Aukerman’s claim that several neighbors complained to her about the noise – and therefore had no reason to stop by the gallery. If they had received any complaints, Steele said, they would have responded.

After more than an hour of comments and questions Mayor George Steele closed the issue. He said the city would determine if any ordinances had been violated and council would consider taking up the issue again in a special session. If council decided to take up the issue again, he said, involved parties would be notified prior to the special meeting.

In other action council accepted department reports, passed their balanced budget on second reading, and let an ordinance relating to the annexation of property owned by Members Choice Credit Union die for lack of a second reading. Code enforcement officer Duane Suttles explained the annexation was unnecessary because the property was determined to already be within city limits.

In new business the city moved to designate Roger Dunfee as the city’s FEMA application agent, and reappointed Kevin Bretz to the Planning and Zoning commission for a four year term.