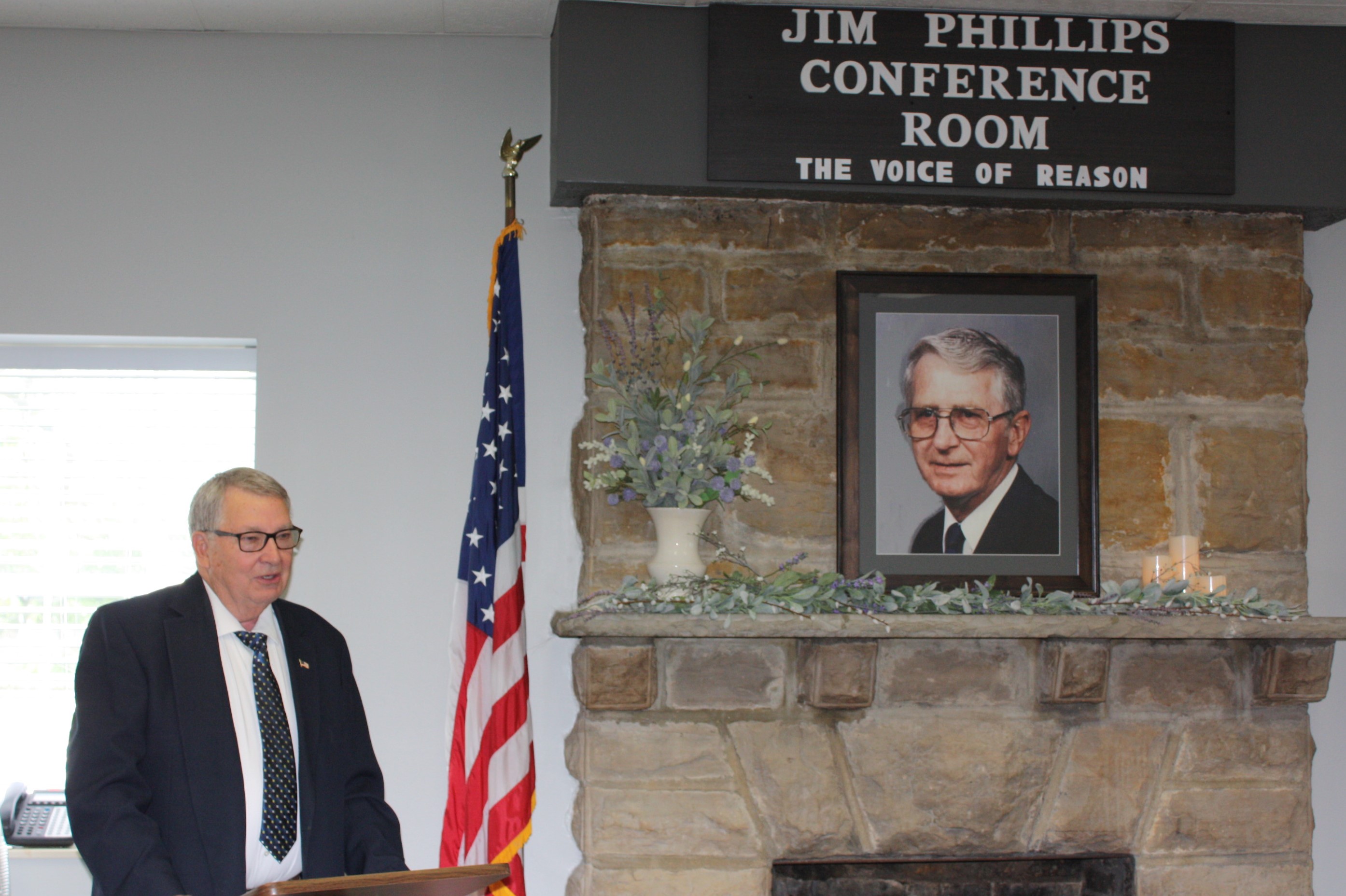 “The world would be a better place if we had more reporters like Jim Phillips,” Steele told those gathered for the dedication. “Because, when Jim Phillips spoke you knew you were getting the truth.”

Steele went on to describe how Phillips impressed him from his first day in office, showing him the respect that was due the office of the mayor while also holding him to task for his responsibility to uphold the integrity of that office.

It wasn’t just so he could get the story, Steele said, but was because Phillips held firm convictions and carried an abiding love of the city and community he served. Even after technically “retiring” from active reporting, he said, Phillips regularly kept in touch with city staff and kept his finger on the pulse of local government.

Calling Phillips a “voice of reason,” Steele said he couldn’t imagine a better person to have overlooking each of council’s meetings or a better namesake to remind them of their duty to the city and their constituents.

Council members Pearl Crum, Bradley Cotten, Terry Stamper, and Sudy Walker also shared their memories of Philips, as did representatives of the fire department and other city employees and former pastor of the First Church of Grayson, Scott Ford.

“Every time I come in this room… I feel Jim. He’s always here,” Crum said, her voice cracking with emotion. “He was a great (asset) for the city of Grayson.”

Cotten said that, as a young man working at the bank he “always liked the secret handshakes he had with everybody,” explaining how Phillips could make everyone feel special.

Stamper related how, even after he stopped coming to meetings, Phillips kept up with council.

“I ran into him down here at the clinic one day and he wanted some updates on the park,” Stamper recalled. “He wanted me to fill him in even when he was unable to actually come in here and get the scoop on things.”

Walker remembered Phillips as an encourager, echoing a sentiment Ford had expressed earlier.

“I like that you say he was an encourager,” Walker said. “Because, like, if I didn’t know if I was going to run again, he’d stop by and make sure I might reconsider. I think about that.”

The fire department also related stories of how Phillips would bring down his radio for maintenance, so he could stay up on what was going on with their runs.

After the remembrances, Steele announced that the Grayson City Council had, “officially named this room the Jim Phillips Conference Room: The Voice of Reason,” adding that he would like to, “dedicate this room to honesty and good government for as long there is government in this town – the way Jim Phillips would have wanted it to be.”