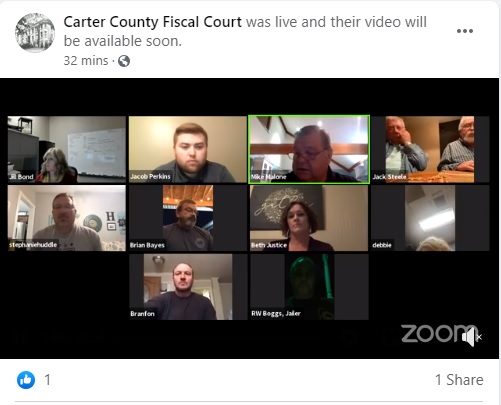 Speed limits on state routes remain unchanged and shall be enforced as marked.

In other action the court heard from Jacob Perkins with FIVCO on using fiscal court as a pass-through for the CDBG grant funding for Genesis Recovery Center. Perkins told court a public hearing must be held prior to the ordinance for the grant pass-through being adopted, and he had planned to hold that hearing prior to the fiscal court meeting. The advertisement for the hearing, though, did not include a link to the Zoom meeting. Perkins said he would drop off necessary paperwork for the county attorney to review and would reschedule the hearing with links to a digital space for the hearing prior to the next regular meeting of fiscal court. Genesis funding request for the coming year will include their traditional grant funding as well as a request for CARES Act funding.

In department reports Carter County jailer R.W. Boggs noted that the jail did have some inmates infected with COVID-19, but they have been isolated from the general population. He said incoming inmates who claimed to have or to have been exposed to COVID-19 are likewise quarantined until they can be tested for the virus. If their test results come back negative they are released into general population. If they test positive they remain isolated until they have cleared the virus.

The court also moved to adopt a resolution and agreement to abide by Department of Transportation rules related to improvements on West Brinegar and Huffs Run Roads. This agreement is a requirement before state discretionary funds can be released for improvements to those county roads.

In other action the court moved to adopt a resolution approving a contract and agreement with Republic Services for solid waste service. The court adopted that agreement pending review and approval by county attorney Brian Bayes.

Judge executive Mike Malone also took opportunity before the start of the meeting to commend Carter County’s election officials and party officials from both major parties for their work in the recent presidential election. Malone said the county was “lucky” to have trustworthy local election and party leaders who worked together to express the will of the county’s voters.