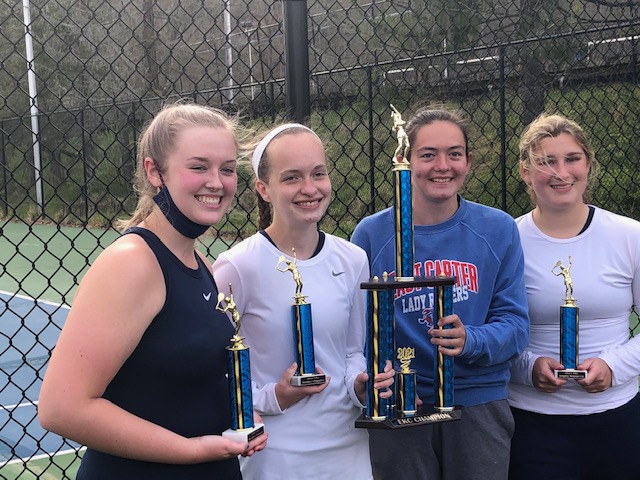 The girls took three out of four places for finals during their semi-finals matches last Tuesday. Maria Hayes and Kaitlyn Conley both won their singles semi-finals matches – Hayes beating Rowan County’s Grace Davison 8-0 and Conley winning over Riley Hill, of Fairview, in 9-7 fight – setting the stage for an all East Carter singles finals.

In the doubles semi-final Aliya Lewis and Emma Moudy beat Lewis County’s Haylea Moore and Taelyn Johnson 8-1. This was the girls’ second doubles appearance in the EKC Tournament, which wasn’t held in 2020, and their second time to advance to the finals in the doubles category.

On Thursday Hayes beat her teammate Conley 6-0, 6-0 in what coach Jeff Porter described as a “hard fought match.”

“Kaitlyn came to the net multiples times, as usual, but Maria hit lobs and passing shots for the win,” Porter said.

Lewis and Moudy took home the win in doubles as well, beating the Rowan County team 6-2, 6-1 for the championship and playing what Porter called, “their best match of the season.”

This was the first EKC doubles championship for the duo.