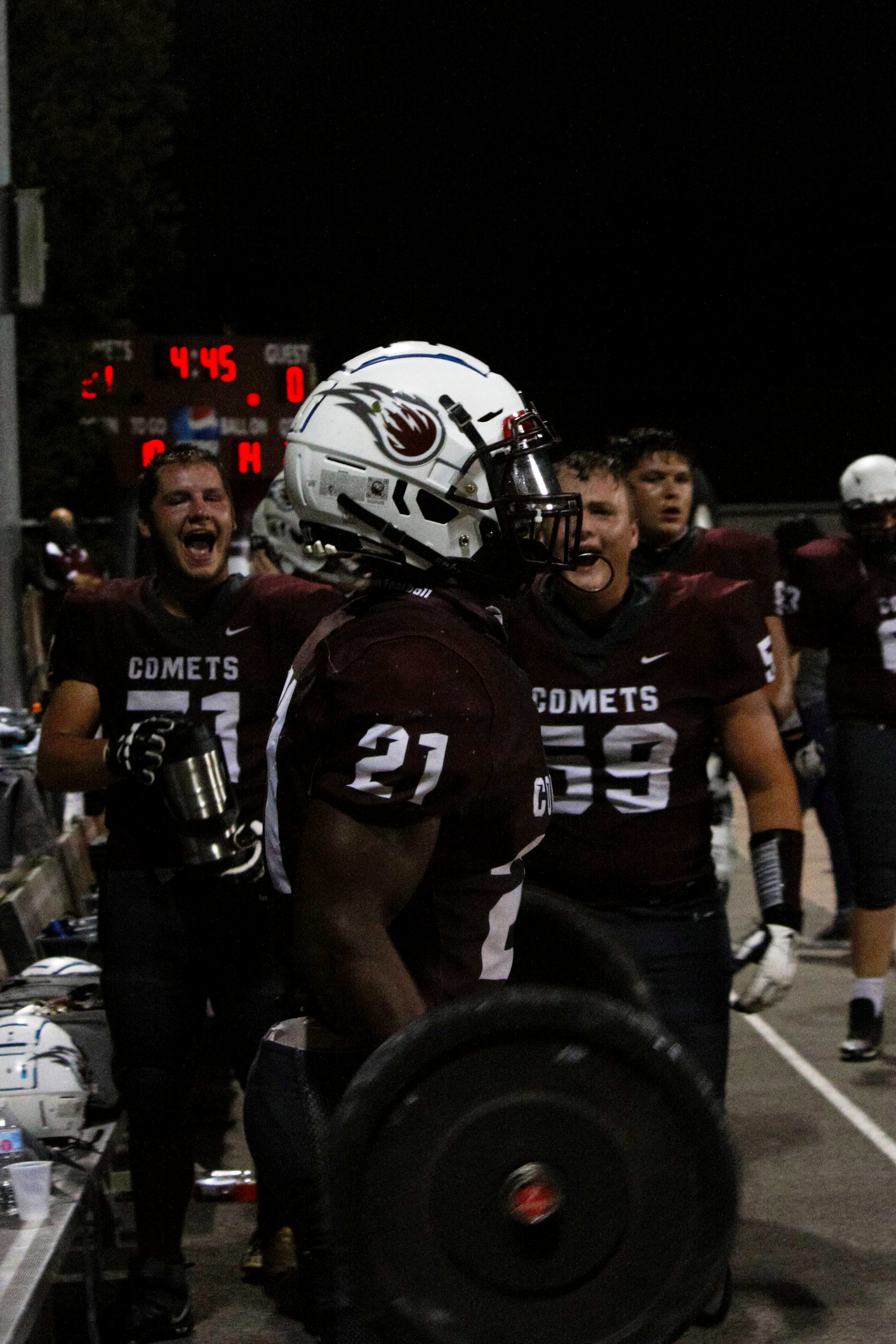 West Carter played their first game in regional competition last Friday, against Walter Verona, holding the visitors scoreless until the final quarter and winning the game 43-6 to advance to the next round of semi-finals.

Walter Verona took the opening kickoff and went three and out. After a bad snap on the punt Gavin Gibson tackled the punter for a 12-yard loss. West Carter took over the ball deep in Walter Verona territory and Cline scored the team’s first touchdown on an 11-yard run. Garrett Wolfe’s kick was good after the first touchdown, taking the score to 7-0 with 9:18 on the clock.

Cline’s next TD came with 3:47 on the clock, on a 13-yard run, but the attempt to run the ball for two extra points was unsuccessful.

The final touchdown of the quarter, also from Cline, came on a four-yard run with less than a minute left on the clock. Jackson Bond caught a 55-yard pass in the last minute, but slipped at the four yard line, opening the way for Cline’s third TD of the game. After a successful kick from Wolfe, West Carter ended the first quarter up by 20 points.

Cline would score another eight points for West Carter in the second half, running 23 yards for the touchdown and successfully running the two-point conversion – with just over five minutes on the clock – to take the score to 28-0 at halftime.

The Comets next two touchdowns came courtesy of Bond, in the third quarter. Bond scored his first on a 27-yard pass from quarterback Orry Perry, with Cline running the two-point conversion. That play took the score to 36-0, with 9:37 left in the quarter.

Before the quarter ended West Carter would score once more, on a huge 95-yard pass from Perry to Bond. That play, and Wolfe’s kick, took the score to 43-0 with just under two minutes left in the third quarter.

The score would stay there until the final seconds of the fourth quarter when Walter Verona’s Trey Ferguson connected on a 44-yard pass from Trey Hatmaker for a TD with just ten second left on the clock. Walter Verona’s pass on the two-point conversion attempt failed however, leaving the final score 43-6.

Walton Verona had seven first downs, five penalties for 40 yards, one turnover on a fumble, 40 rushing yards on 27 carries, and 108 passing yards on four connections over 12 attempts, for a total of 148 yards and 39 plays.

Cline had 23 carries for 180 yards and four touchdowns. That performance made him West Carter’s career rushing yards leader with 3,786 yards for his career, overtaking 2000 graduate Eric Berry’s twenty year old record of 3,750. Cline still trails Berry for career rushing attempts leader, though. He needs another 13 carries to break that record. He’s currently in second place for career rushing touchdowns with 54, one behind leader Peyton Brown, who graduated in 2018. He currently has 77 total career touchdowns, with 54 rushing, 13 receiving, three interception returns, one fumble return, four kickoff returns, and two punt returns.

Bond’s 196 yards is a single game record, with his 95 yard pass – possibly the longest play in school history, though record keeper Zach Stevens couldn’t verify that – contributing significantly to that total. Bond has 40 receptions on the year and is tied for first for receptions in a season with teammate Blake McGlone’s 2019 record. He now has 616 receiving yards on the season, two yards from breaking the record set by Zach Walker in 2015. He is currently in second place in career receptions, with 96, second in career receiving yards at 1,493, and second in career receiving touchdowns with 22.

Gibson also added to his career tackle for loss record, with 45.5 for his career.

Wolfe added to his career record total for extra points, now at 84/104. He also holds the record for career makes and attempts and is the career leader for kicking points scored, with 84 extra points and two field goals, giving him 90 total kicking points for his career.

This year’s senior class, with 30 wins in their four years, is the most winning class in school history. Coach Daniel Barker, in his third year with the team, is already third in career head coaching wins with 25, one win behind second place. Kevin Brown is the school’s head coach with the most wins record, with 91 wins to his name.

West Carter hosts Beechwood next week for semi-finals. This is the school’s second straight semi-final appearance since moving up to class 2A from Class 1A last year. Beechwood is a fourteen time Class 1A state champion, winning their last Class A title in 2018.