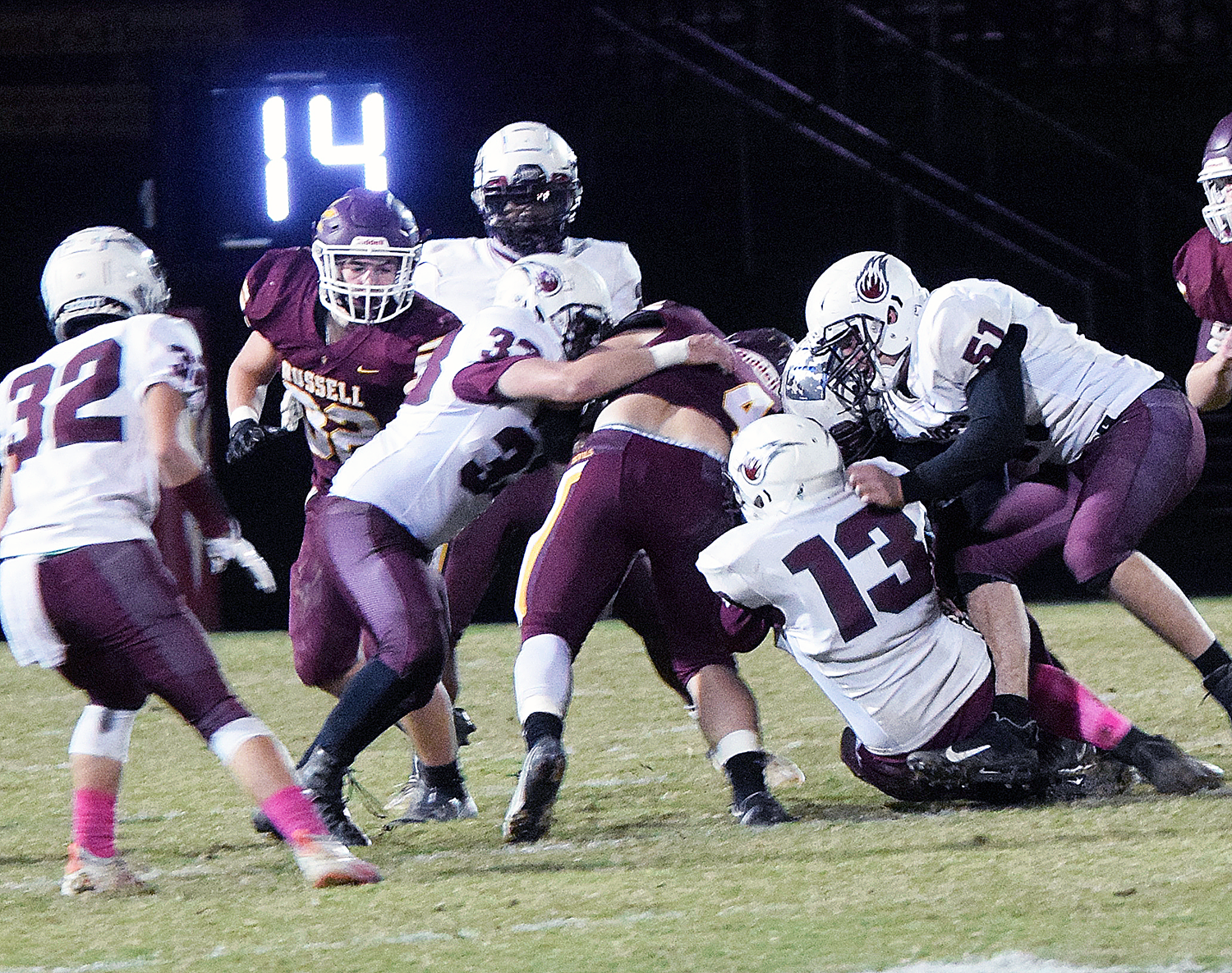 RUSSEL – West Carter was down by one, with less than three minutes left in their game against Russell last Friday, when Russell’s quarterback Charlie Jachimczuk intercepted a pass on a play that West needed to win the game, taking the score to 21-13 and seemingly assuring Russell of their 28th win over the Comets. But West Carter wasn’t ready to let things lie there, fighting back for a 25-21 win over the Red Devils – the team’s first ever win against Russell.

Russell scored first, near the end of the first quarter, on a three yard run from Ethan Osborne and a Nathan Totten kick, making the score 7-0 going into the second quarter.

West Carter tied things up near the end of the second quarter when Leetavious Cline ran 55 yards on an interception return and Garrett Wolfe made good on his kick.

Things were tied 7-7 going into the second half, but Russell scored next with 5:46 left in the quarter when Osborne ran the ball five yards and Blake Hern made good on his kick for the Red Devils. This had the score at 14-7, Russell, as the teams headed into the final quarter. That’s when the game really heated up.

Logan Berry took the score to 14-13 on a ten yard pass from QB Orry Perry, but the kick from Wolfe was blocked by Russell.

That was when Jachimczuk took the score to 21-13, and things seemed over for the Comets. But if we’ve seen anything from West Carter this year, it’s the this team doesn’t give up when things get rough.

“(We had) stopped Russell at the three yard line with (less than three) minutes to go, down 14-13 needing to go 97 yards for an opportunity to win,” West Carter stat keeper Zach Stevens explained. “Russell’s QB/DB Charlie Jachimczuk intercepted (that) pass and returned it for a TD making the Russell lead 21-13.”

“West got the ball back with around 1:20 left. They scored on the (23 yard) pass to (Jackson) Bond with 20 seconds left, to make it 21-19 Russell.” But, the attempted two-point conversion to tie the game failed, Stevens noted.

“West then executed a perfect onside kick,”he said. “West Carter kicker Garrett Wolfe lined up to kick the ball to the left side of the field, but when he kicked he perfectly executed a back foot kick to the right side of the field and Cole Crampton was able to recover the kick at the perfect location after it had traveled the ten yards it has to travel to be a legal kick. West took over with 20 seconds left, down 21-19. Perry threw a shirt pass to Cline to get to Russell’s 32 yard line with four seconds left. Next play Perry dropped back and threw the Hail Mary into the end zone, Bond tipped the pass and Gage Leadingham grabbed it for the TD to win the game.”

West Carter’s 25-21 win over Russell makes the team’s record for regular season play seven wins and one loss. Stevens said, with COVID restrictions, this coming week’s game against Greenup still looks to be canceled. If something changes, though, West could host the first round of playoffs November 13.

West Carter had ten first downs to Russell’s 20, and five penalties, for 35 yards, to Russell’s two for 15 yards. Each team had two turnovers, one each on a fumble and an interception. West Carter rushed for 103 yards on 21 plays. Russell rushed for 212 yards on 53. The Comets passed for 96 yards, making good on nine of 21 attempts, while the Red Devils passed for 99 yards, with eight connections on 16 attempts. Total yardage for each team was 199 yards West Carter, on 42 plays and 311 yards for Russell, on 69 plays.

Cline had 17 of those carries, for 107 yards, including his 55 yard interception return for a touchdown and 16 tackles. Perry was 9 for 21, for 96 passing yards and three touchdown passes. Gavin Gibson had 15 tackles, Dylan Roe had 13, and Isaac Bond 10. Jackson Bond had three catches, for 35 yards and one touchdown.