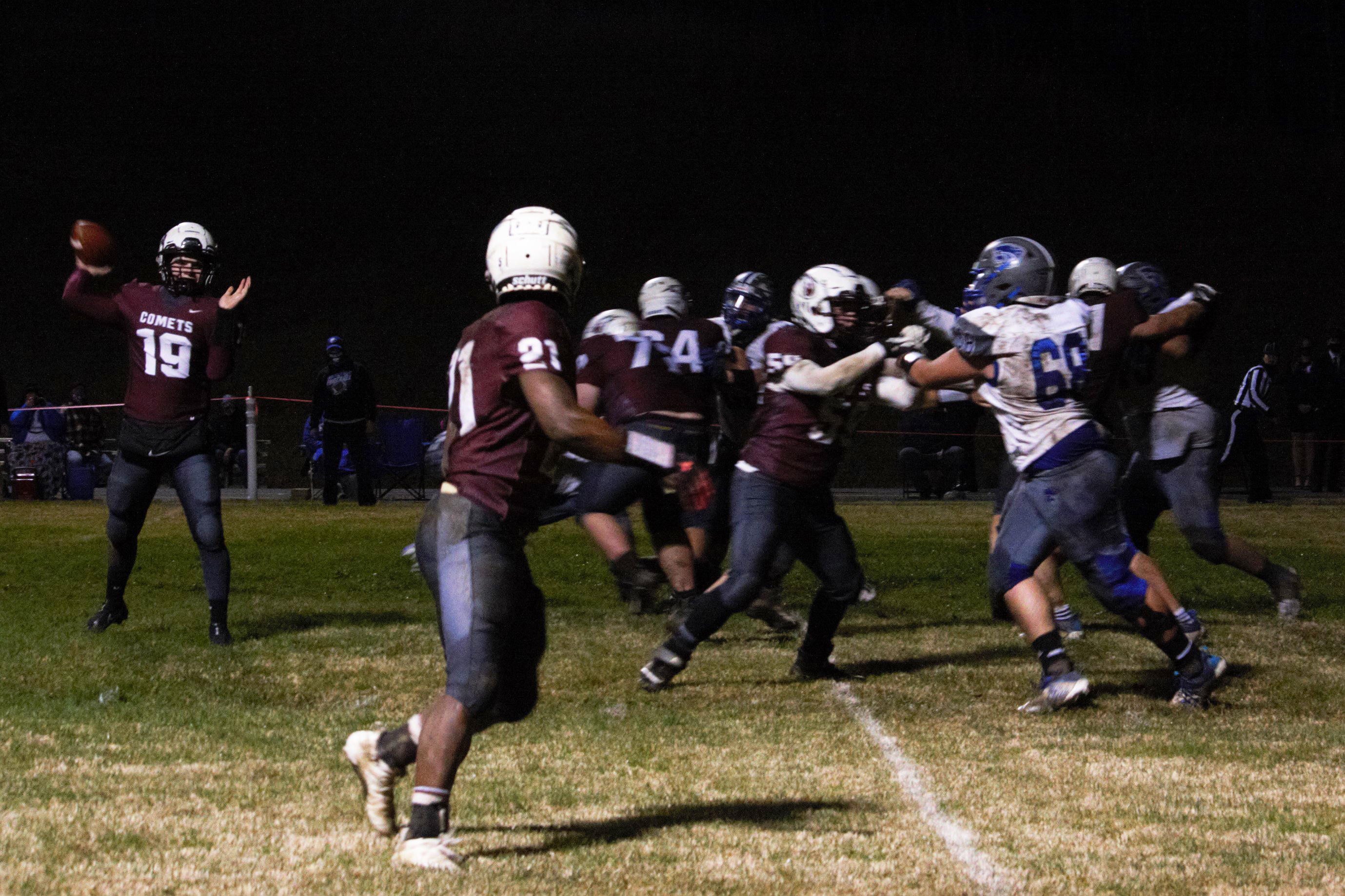 The Comets had to fight for every inch of ground they gained against Shelby Valley last Friday, but fight they did – right on through to a District 8 championship, their second in as many years, and an advancement to the Regionals.

Jackson Bond scored the first touchdown of the evening early in the first quarter, on a nine yard pass from quarterback Orry Perry, putting Perry one step closer to the career touchdown passes record and adding to his total for career yards passed.

West Carter’s next touchdown came courtesy of Leetavious Cline. It was one of those long, fast, break away runs that Cline has become known for this season, 56 yards, but it would be the last easy run the Wildcats would let Cline make that evening. The running back, and the team, would have to work hard for every yard gained the rest of the game. Though they’d make it close to the end zone again in the second quarter, they had their play called back for holding and turned over the ball to the Wildcats on downs.

It was a hard slog, and West gave as good as they got, holding Shelby Valley scoreless until late in the second quarter when Ethan Bentley scored a TD, bringing the score to 14-6 when the Wildcats failed to connect on an attempted conversion.

The Comets didn’t waste any time snapping back though, making it to first and goal with 44 seconds on the clock on a pass to Bond. Cline would then take it to the goal line before Perry scored touchdown number three for West, with the kick from Garrett Wolfe taking them to 21-6 with 15 seconds left in the half.

In the third quarter Perry would tie the touchdown pass record on a 25 yard connection to Gage Leadingham, who scored touchdown number four, taking the score to 27-6. The two-point conversion attempt was unsuccessful though, keeping the score where it was.

Perry would break that record on his next touchdown throw, a 30 yard pass to Cole Crampton, taking the score to 34-6 with Wolfe’s successful kick.

In the fourth quarter the Wildcats pushed back a little more, with a touchdown early in the quarter on a 17 yard pass from Russ Osborne to Lincoln Billiter taking the score to 34-12 after another unsuccessful conversion run. But on the next kickoff return to the Comets, Bond caught the kick and made a spectacular 66 yard run to score touchdown number six for West Carter. That took the score to 40-12, and 41-12 on another successful kick from Wolfe.

The Comets next touchdown, courtesy of a 55 yard pass from Perry to Leadingham, would take the score to 47-12, 48-12 with the extra point kick, and break the career passing yardage record for Perry.

Shelby Valley scored once more before the game ended, on a 69 yard pass from Osborne to Anthony Pallota, taking the score to 48-18 with six minutes left on the clock, but that would be the final score.

With a first down, just shy of the goal line, and just over a minute left on the clock, Coach Daniel Barker directed his team to take a knee on the next three downs and run out the clock.

“We took a knee because I think when you can run out the clock to end the game it’s the right thing to do,” Barker explained. “I didn’t feel like scoring another touchdown at that moment would have really benefited us in any way. When you can end the game with a knee, I think you should. Victory formation is my favorite formation in football.”

Barker said even with that ending, it was a tough game that Shelby Valley made them fight for.

“I thought our kids executed well. Shelby Valley had a really nice game plan versus what we do, and they made us execute. The game wasn’t easy, but I thought our kids consistently made plays that allowed us to move the chains and score points,” he said.

“They definitely made us work defensively,” Barker continued. “I think our kids responded and made some timely stops. Valley has a really nice offense, and they have a bunch of kids that can score, so we were happy with our defense for much of the night.”

With Perry breaking two records on Friday, and Cline, Wolfe, and Gavin Gibson adding to records they set the previous week, Barker was justifiably proud of his boys.

“We’ve had a number of boys set career marks the last two weeks,” he said. “Orry (Perry) setting the career passing yardage and touchdown marks is a huge accomplishment. I think to set it in the district championship, and to play as well as he did tonight, is phenomenal. I’m very proud of him. Last week Gavin Gibson set our career TFL (tackle for loss) record and Garrett Wolfe set our career extra point record. Leetavious Cline continues to add to his record single season rushing mark, and we’d love to see him break the career rushing yardage record. We’re proud of all of our boys. They’ve all been part of a record breaking team, just total team effort all year. They root for each other.”

Perry, for his part, expressed a sense of humility beyond his years, a testament to his character and Barker’s coaching.

“My name will be in the record books, but I owe it all to my teammates. Without them, none of those yards or touchdowns happen,” Perry said. “I’ve got the best pass blocking offensive line around and I’ve got the best perimeter playmakers around. I’m really fortunate to play with this group of guys.”

He said he tried not to think of breaking the record while on the field, but to just focus on the game.

“The main focus for every game is to come out with a win. Statistics are just a bonus for me. I’m thankful that once I was in the position to break both those records tonight my coaches let me continue to throw and my teammates made great plays.”

Though their season isn’t over yet – now that they’ve won their district they’ll move on to regional competition – Perry said this season is going to leave him with a lot of good memories and a sense of accomplishment.

“Looking back on this season, we’ve done a lot of the things we have wanted to do, but we want to continue building on that. Bringing the barrel back was a goal of ours, and it being the 50th game of the series made it even more special. Beating Russell for the first time ever was as big of a win as any we have ever had as a program, and that was another thing we wanted to accomplish. Winning the district again was something really high on our list of goals as well, and we were fortunate enough to do that tonight. We will get to host the regional championship for the first time in school history next week against Walton-Verona, and are looking for our first trip to the state semifinals. Personally, I’m really proud of everything this team has been able to accomplish and we hope to continue our playoff run.”

Coach Barker told the boys to take the night, West Carter’s Homecoming, to enjoy themselves and they would talk about next steps later, but told the Times he was looking forward to their next game as well.

“Going forward we want to take the next step and win a regional championship. It’s been on our minds all season to see how far we can go this year. Whoever we play will be a big test for us, but we will focus all our efforts on being as ready to play as we can be.”

Cline had 22 carries, for 176 yards, and one touchdown, putting him 144 yards from breaking the school career rushing yardage, and 256 yards from becoming the school’s first 2,000 yard rusher in a season.

Bond had seven catches for 69 yards gained and one pass reception touchdown, and a second touchdown on a 66 yard rush from the kickoff return.

Leadingham had two catches for 80 yards and two touchdowns. He has four catches on the year, all for touchdowns.