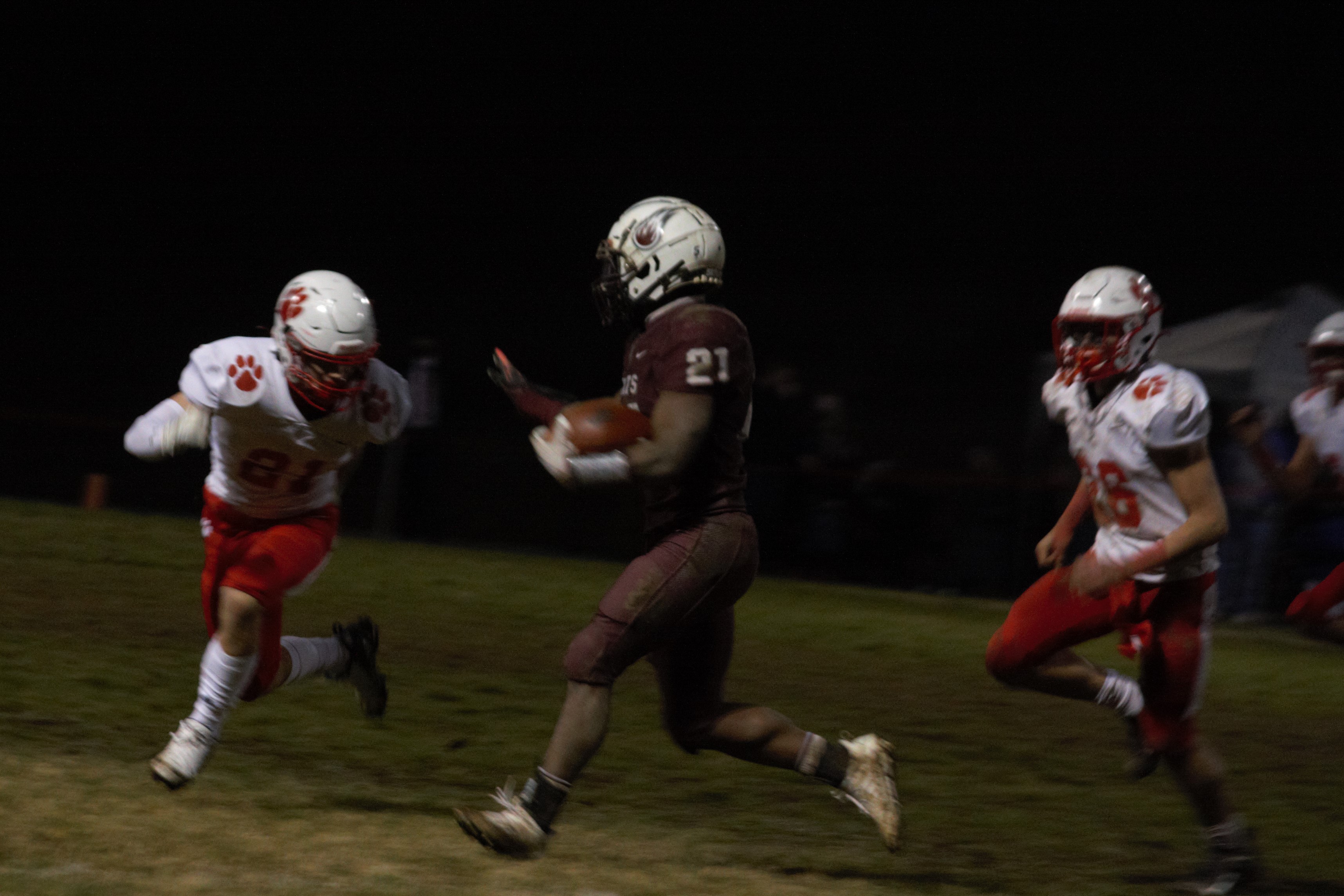 Kentucky’s Mr. Football award is kind of a big deal. Past winners of the award, chosen by a panel of sports writers and broadcasters from across the state, have gone on to successful college and even NFL football careers. A young man could be forgiven if he was a little proud of being nominated, but that isn’t the vibe West Carter’s Leetavious Cline puts off at all. Instead he remains quietly humble about his nomination and the outstanding, record-breaking season that led to it.

“Leetavious is a man of few words,” teased West Carter coach Daniel Barker about Cline’s reticence to discuss his accomplishments.

Cline, whose speed and fancy footwork earned him several records and accolades, said he didn’t think much about those records before, while, or after breaking them. Instead he focuses on his love of the game and desire to play.

“I’d watch it all the time when I was little, and then in second grade I decided I wanted to play and ever since then I’ve just loved playing it,” Cline said. “At this point, it’s the only thing I do.”

When asked about the standout season the team had this year, the one that earned him the nod from the Mr. Football voters, his only real comment is that he wished it could have lasted longer – so he and his teammates could have played more football.

He didn’t focus on the numerous records he set; Cline finished his high school career with 579 attempts, 3986 yards, and 76 career rushing touchdowns, all school records for career. He also holds the record for rushing attempts in a game, with 36 carries on the night in the team’s final game of the season, and had 100 or more rushing yards in every game of the season, finishing with 2,115 yards and 31 rushing touchdowns, both season records. Instead he focused on how much he enjoyed playing the game.

“This was the funnest year of football I’ve ever played,” Cline said. “I just wish it would have ended a little bit better.”

He isn’t oblivious to what it would mean for him, or the community, to win the Mr. Football title, though.

He noted that the school has brought home the recognition for their girls basketball program in the past – pointing out Megan Gearhart being recognized as Miss Basketball in 2003 – but they’ve never had a player named Mr. Football.

Whether he wins or not, Barker said Cline has “been a coach’s dream.”

“He’s always been a kid that, no matter what we ask him to do, or what position we put him in, he’s always thrived in it,” Barker said, “and did it with a smile on his face, and gave us his best. You knew that he was going to show up every day and do what you asked and do it the best he could.”

When coupled with his work ethic, Barker explained, Cline’s natural talent and skill make him a standout.

“That (Cline’s speed, coordination, and footwork) is something that nobody’s ever coached him on. You’re just born with that ability, and he just sees the field so well. He’s got a lot of athletic gifts; he’s fast, he’s strong. But some of the plays that he would make, they’re not normal plays, and that’s the reason that he’s a finalist for Mr. Football.”