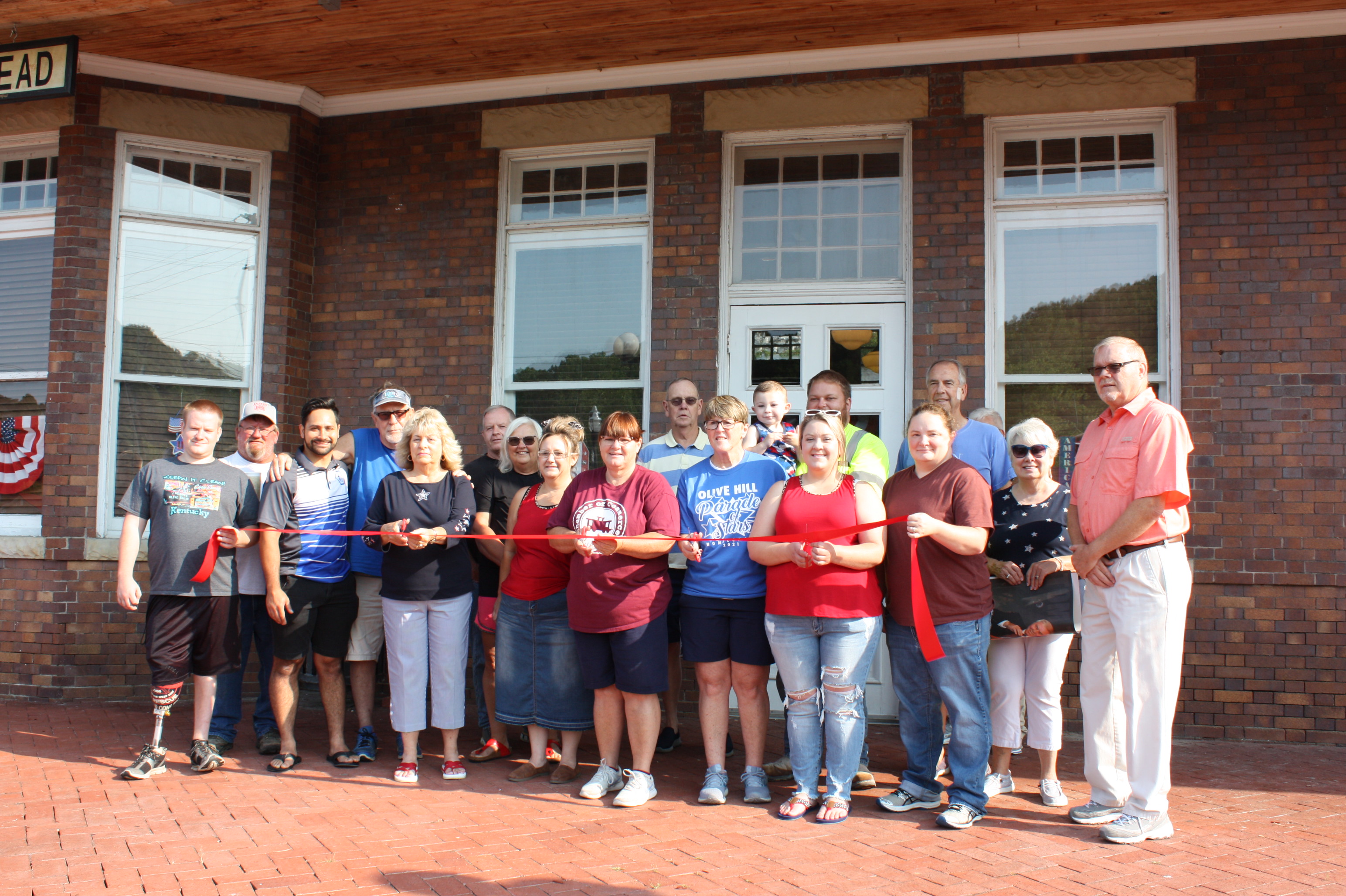 It’s been a long time in the making, but the community of Olive Hill finally held a ribbon-cutting for a new Welcome Center at the Depot this weekend. The new facility – which holds memorabilia highlighting local musicians, songwriters, and other notable Olive Hill natives – will serve as a place for visitors to learn more about what the town has to offer.

Olive Hill Chamber of Commerce president Lisa Messer Conley, who spearheaded the push to establish the Welcome Center, praised the efforts of volunteers who worked tirelessly to get the Center ready ahead of the July Fourth holiday.

“In the last week, it’s probably been ten, twelve hours a day,” she said. “If it wasn’t for Jesse Oney and Stevie Tackett and my sister Von (Perry) and niece Audy, and then Angie (Fultz) came in yesterday and cleaned… before she had to go (perform with “On With the Show”),” she said they wouldn’t have been able to get everything done.

“JD Rayburn has been amazing,” she added. “Dalton (Conley) has been such a help. Without all that, and I know I’m missing people, but I mean, there is no way we could have opened.”

For a while it looked like they might not be open in time for Homecoming and the Fourth. After the long delays related with COVID, some last minute issues nearly delayed the project longer. But, Conley said, they knew they wanted the Welcome Center open for the holiday weekend.

“We knew we wanted to be open this weekend because there was going to be an enormous number of people in town,” she said.

Some of those people wandered in the day before the official opening, to use the rest rooms or just to check on the activity, and they were all “blown away” she said.

The displays are impressive, with much of the main room dedicated to Tom T. Hall and his longtime friend and collaborator Darvin Sturgill. Other rooms celebrate local fishing notable Crash Mullins, bluegrass band Hammertowne, and singer-songwriters Sasha Collette and George Molton.

Conley said she thinks the new Welcome Center will be a draw for visitors to the community. It’s a good starting off point for those wanting to explore local history, she said, or for those who want to stop and find out where they can grab a bite to eat before putting their kayak into Tygart Creek.

“Going up on the Hill (to the Olive Hill Historical Society) and seeing that museum up there – you’ve got all of this down here (at the Welcome Center) that is entertainment and the history you can learn, then you can go up on the Hill to that museum at the Historical Society, and, you know, it’s endless what you can actually do in Olive Hill. There is so much to see. There are so many attractions here. It’s the history, and it’s the events, and the parks. That’s why we wanted to do this.”

The Welcome Center will be open Thursday – Saturday, from 10 a.m. – 4 p.m. for now, “but, we’re hoping to expand those eventually,” Conley said.

They also have some Tom T. Hall memorabilia for purchase, which they hope to add to. Currently this consists mostly of donated publicity photos that can be purchased for $1 each, with a limited number of autographed copies starting at $5 each. Those can be picked up from the Welcome Center during their regular operating hours.