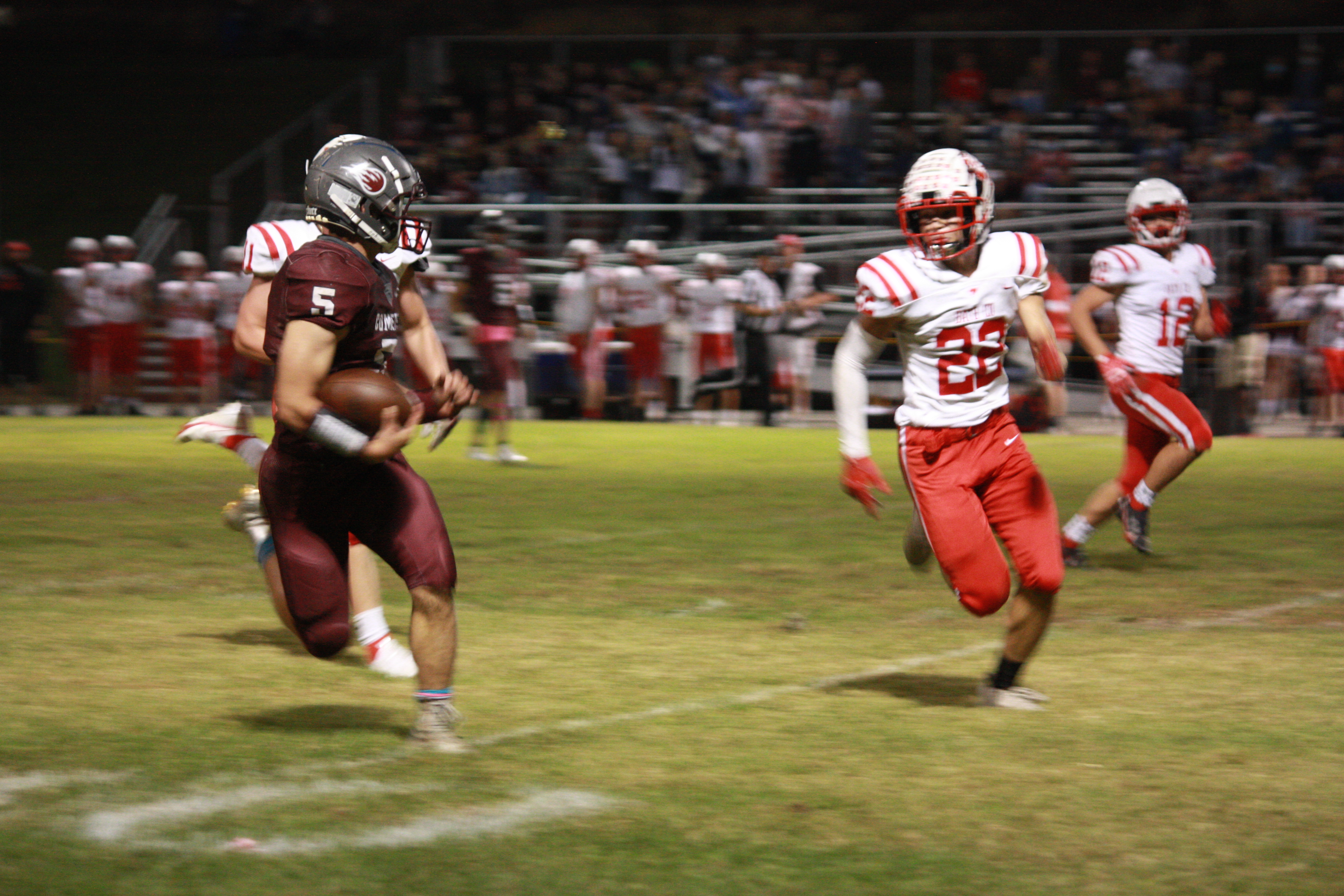 The West Carter Comets didn’t take long to score their first touchdown last Friday against the Bath County Wildcats, and they kept that energy up all night, finishing the night five touchdowns up over their opponents.

Cole Crampton scored first for the Comets, early in the first quarter. Crampton then carried the ball another 40 yards for a first down, setting up quarterback Eli Estepp to connect on a pass to Jackson Bond for touchdown number two, putting the Comets up 14-0 over the Wildcats.

Bath County only scored one touchdown in the first half, on a 47-yard rush from Quentin Lewis, taking the score to 14-7 on a kick from Bryson Stigall.

The Comets then took the ball on their own 39-yard line after the kickoff, but after a 15-yard penalty on an illegal block ended up first and 25 from their own 24 yard line. But West Carter didn’t let that hold them back. Bond added another 47 yards, and a first down, on a pass from Estepp. After another first down, on a pass to Blake McGlone, Crampton ran another touchdown from the 36, his second and the Comets’ third, to put the score at 20-7, going to 21-7 on a good kick from Estepp.

West Carter’s next touchdown came courtesy of McGlone, who connected on a short pass from the 25 yard line, before running nearly the entire length of the field, for a total of 75 yards gained, taking the score to 28-7 after Estepp’s kick with just over ten minutes left in the second quarter.

After Bath County had two incomplete passes in a row, they gave up possession to West Carter on a fourth down with nine minutes left in the quarter. That was more than enough time for the Comets to score yet again. It took West Carter less than a minute for Estepp to connect on a pass to Kaden Wilson, who ran in touchdown number five – putting the score at 35-7 after Estepp’s kick.

Crampton then scored number six – his third of the game – putting the score at 42-7 with just 1:14 left in the half.

The action continued to come fast in the second half. The teams hadn’t been back on the field for more than a minute when Bond carried the ball for more than 60 yards and touchdown number seven, putting the score at 49-7.

It looked like the Comets were going to add an eighth touchdown, after Isaac Bond intercepted a pass from Bath County on the Comets nine yard line and, breaking out free and clean, made a dash deep into Wildcat territory, but a flag on the play brought the ball back for a 15-yard advance.

Cade Oppenheimer also had several carries in the second half, advancing for 37 yards for a first down from the Wildcats’ 38 yard line, but a penalty for illegal formation put the Comets at second and 18 from the 46.

The score was still at 49-7 going into the fourth quarter, and the Comets wouldn’t add to it. But the Wildcats did. Zachary Otis carried the ball for 70 yards after receiving a pass from QB Jacob Easton, taking the score to 49-15 after a two-point conversion from Cameron Allen.

The Comets second string quarterback, Kale Back, then held the Wildcats scoreless for the remainder of the game, helping run out the clock to end the game at 49-15.

Crampton rushed for a total of 154 yards, with three touchdowns, while Oppenheimer rushed for 81 yards, and Isaiah Bond carried the ball for 13 yards.

Estepp was 100 percent on his point-after-touchdown attempts, adding seven points to the Comets total, with Crampton adding 18 with his three touchdowns, Bond adding 12 points, and McGlone and Wilson adding six points each.

Isaac Bond also had the team’s only interception, returning 40 net yards for the Comets.

West Carter plays away this Friday, October 8, at Prestonsburg.

East Carter played away last week, at Estill County, bringing home a 37-20 win over the Engineers. Stats for that game were not yet available at press time. The Raiders play at home this Friday, October 8, against Ashland Paul Blazer at 7:30 p.m.