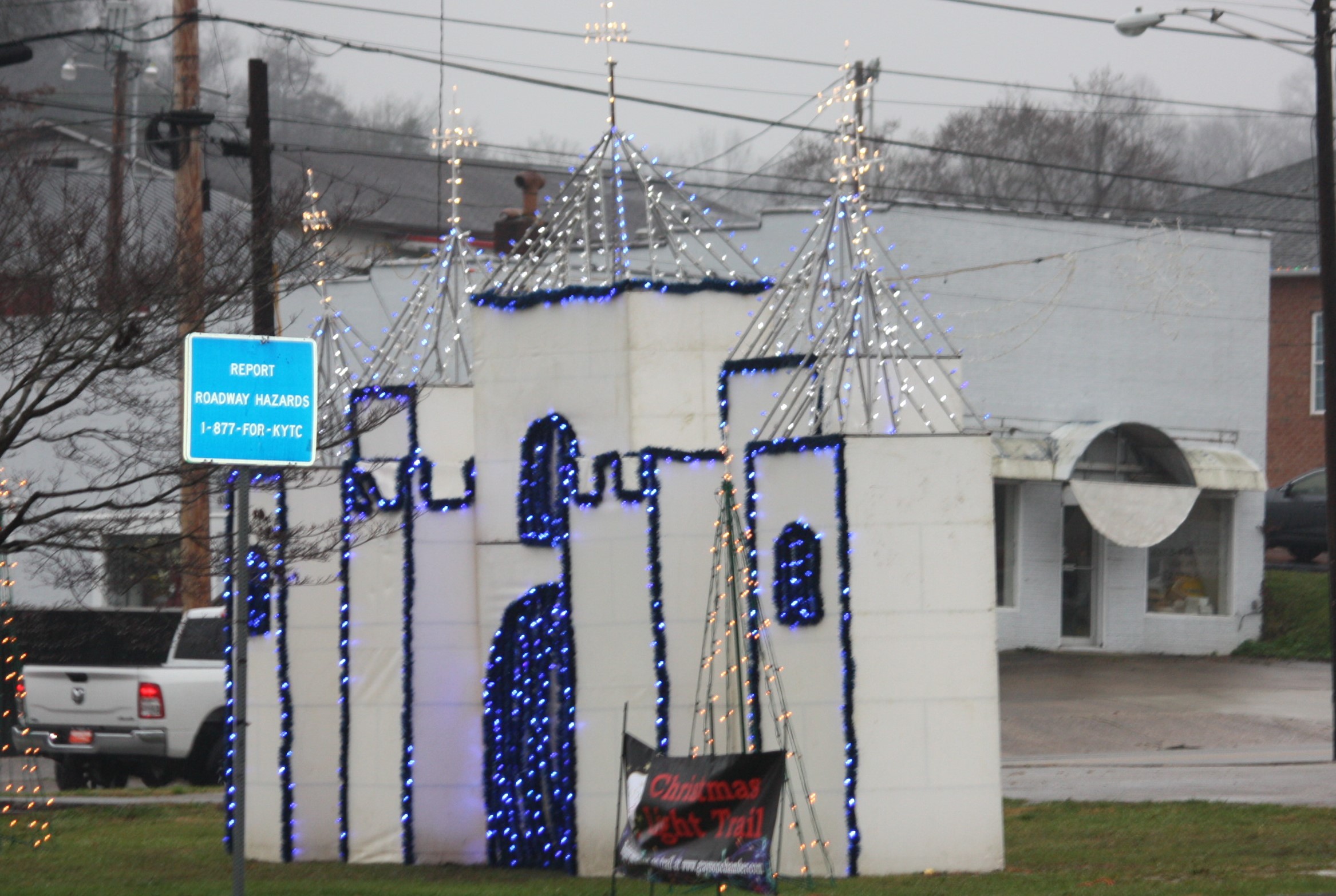 You ever wonder what goes into decorating your town for the holidays? You may have seen a workman in a cherry-picker, hanging illuminated poinsettias or snowflakes from streetlights. It’s a bit more than just hanging decorations though. It’s a big job that can take a complete work crew several days to complete.

Damon Robinson, with the Grayson Street Department, said while the actual hanging of the lights goes rather quickly, the whole process takes about a week. That starts with pulling the lights out of storage. They take them off the trailer they are stored on, then plug them in to check if any bulbs need changed. After changing any dead bulbs and making any other repairs, they load the decorations back onto the trailer. They do this in a staggered order so they can easily alternate as they hang them.

With 76 pole decoration, the process is a good day’s work, even with three men checking lights and changing any bad sockets. They add a fourth man to the crew when it’s time to put the decorations up. Robinson explained that one man drives the truck, while another works the bucket. A third man hands the decorations to the person waiting in the bucket of the lift. A fourth man will follow, to provide a safety buffer between the bucket truck and any other traffic.

Grayson’s decorations go up the week of Thanksgiving and, because of timers and dusk to dawn sensors on the lights, can be set to turn on for the first time on the evening of Thanksgiving without requiring anyone to come in on the holiday. It also helps keep the city from wasting electricity by having the lights on during the day, or wasting man hours by running someone out to turn them on and off.

They will be taken down the first workday after January 1, weather permitting.

It isn’t just light poles they are decorating in Grayson. They have a large nativity set up in city park as well and this year – for the first time – they’ve set up a large castle and a couple of Christmas tree ground decorations.

The castle was donated to the city, Robinson said, but it didn’t come with any instructions. Work crews had to figure out how to put it together on their own, he explained, but it eventually came together. The castle can be seen on the corner of Carol Malone Boulevard and Main Street, across Carol Malone from the city building.

“It does take a lot of time,” Robinson said of planning and staging everything before they’re put up, as well as maintenance after they’re up. “Bub (Messer, head of the street department) is real particular.”

He said Messer not only makes sure all the lights are working before the decorations go up. He goes out and re-checks lights once they are up and changes any blown bulbs regularly throughout the decoration season.

It isn’t cheap doing all that maintenance either. Robinson said they put about $1,800 into replacement light bulbs and extension cords. One thing the city is looking at doing within the next year is trading out existing light systems with LEDs. This could save the city on the cost of replacement bulbs as well as energy costs.

The new castle is lit with LEDs, Robinson said.

It’s much the same story on the other end of the county. Taylor Duncan, with the Olive Hill utility department, also works with a four-man crew and goes through the city’s decorations checking and replacing any burned out bulbs. He said it only takes them about two days to get ready, and only a day to hang their approximately 50 pole decorations around town. But, he noted, they also decorate the caboose at Hop Brown Park and the exterior of the Depot building.

Duncan estimates that, between checking all the lights, putting them up, taking them down, and storing them the city has around 3 weeks of time and 500 man-hours or more involved in their decoration efforts.

Olive Hill is also looking at updating their light displays. Duncan said their current lights are around 20 years old. But, he said, it’s pricey to replace the displays. Costs can be anywhere from several hundred to several thousand dollars for each display. One option he said council might consider is purchasing a few new fixtures each month, so they could have all the new ones they need by holiday season next year.