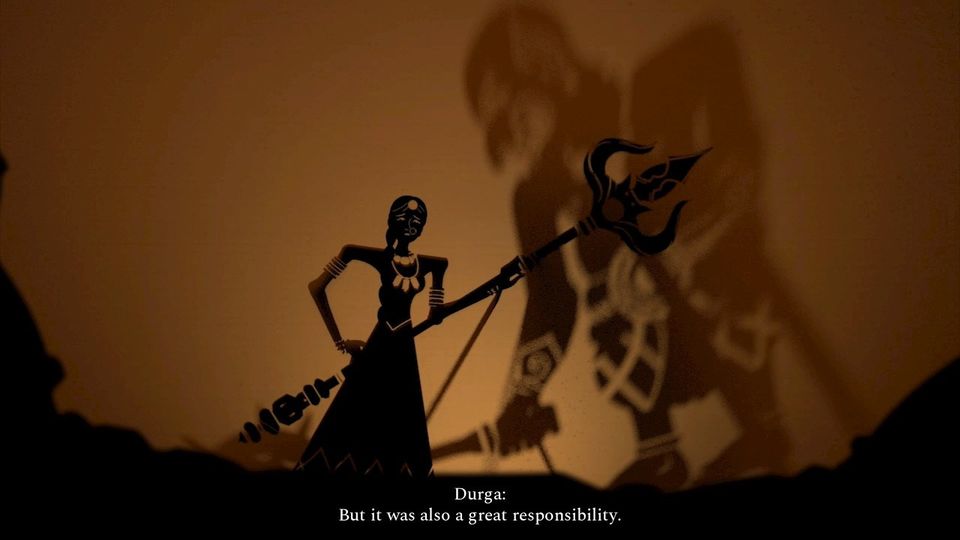 Exploring the myths and legends of India

Raji: An Ancient Epic is one of those games. Available now on the Nintendo Switch, and launching later this year on other major platforms, Raji is one of the more compelling button smashers I’ve played in a while.

It tells the story of our eponymous hero, the acrobat Raji, and her brother Golu, a puppeteer. The carnival performers are in the midst of celebrating the feast of Rakhsha Bandhan when the story Golu has been telling, about the rise and fall of a race of demons, comes to life. Golu, wearing a demon mask to startle the other children watching his puppet show, finds himself swept up by actual demons who are stealing away the children for an as yet unnamed purpose. It’s then that our heroine is chosen by the goddess Durga to fight these demons and restore balance to a world that is being corrupted by their presence. She grants Raji her Trishul, a three pronged spear-like weapon, as she sets out to rescue her brother and heal the world in the process.

Durga, the warrior aspect of the goddess Parvatti, and the god Vishnu narrate Raji’s quest as she sets out to find her brother, solving puzzles to advance the story and heal the land along the way. Raji can also advance the story by stopping to observe murals and art she encounters, with Vishnu and Durga expounding on the significance of what we are seeing. The other standout on the story end are the cut scenes, which reflect the traditional shadow puppetry that Golu practices and are a joy to behold.

As a gamer and a student of folklore, I love these aspects of the game. Most of the games that dominate the PC and console market are told from a European, American, or Japanese point-of-view. When we do see other cultures and mythologies, they are still viewed through a Japanese or a western lens. Raji: An Ancient Epic was developed by an Indian game developer – Nodding Heads Games – and it makes no apologies for its heritage. Rather than holding the gamer’s hand and spelling out the backstory with pedantic monologues from our protagonist, the developers let the story progress and unfurl naturally. Players are rewarded for taking the time to explore the imagery and complete matching puzzles with the remembrances of the gods and Raji’s memories of her brother.

The player-character is rewarded by the gods too, and not just Durga and Vishnu. As she does things to please the other gods, she earns weapons and power-ups that can help her with different enemies. The first of these, awarded by Kali, comes from dishing out violence on demon enemies. Once a sufficient amount of damage has been done, the face of Kali shines above her shrine. Raji can then move into that spot and obtain a power-up, to use right away or hold onto, to do an area-of-effect damage, hurting all demons within its range.

It’s in these demon fights that the game really proves its worth. Stories are great, and puzzles are fun, but the fights in Raji: An Ancient Epic are as challenging as the story and discovery are compelling. The game, which draws heavily on the influence of other third person action platformers like the God of War series, isn’t one where you can just mash your buttons and win. The fights require finesse and strategy. The game prepares you for some of the strategies you’ll want to employ by introducing you to the moves in training-dummy exercises and minor demon fights along the way. You’ll want to take that time to practice, and get your moves down pat.

Health is at a premium in Raji’s world, so the player needs to focus on dodging, counter-attacking and – when prompted by the on screen cues – taking advantage of finishing moves, as these are the only way to refill Raji’s health. It took me several tries to beat the first boss. One reason was that I got so caught up in my own combinations that I failed to recognize when the final demon was telegraphing his attack, and so I failed to dodge it. The other reason was that – again – I was so caught up in my pretty combinations that I failed to take advantage of the finishing move prompt. Once I was aware that this was how I earned my health back, I started following those prompts and had a much easier time progressing.

While Raji: An Ancient Epic is a gorgeous game, with a compelling story, fantastic soundtrack, and engaging gameplay, there are some downsides. One of those is a lack of camera controls. I really want to be able to change my perspective sometimes; as much for the sake of viewing the environment as for controlling the flow of battle. The overhead third-person view can also seem a little dated. After all even God of War – an obvious influence for the game-play style – has moved on to a more cinematic, third-person, over-the-shoulder view with their latest incarnation of the title. But this is nit-picking. For Nodding Heads’ first release, Raji: An Ancient Epic is a resounding success, and a lot of fun.

I can’t wait to go back and finish the story, to see how Raji and Golu will be reunited and how our heroine will influence her world. This game is just that good, challenging and compelling. I highly recommend it.

Raji: An Ancient Epic is available on Nintendo Switch now, for $22.49, and comes to Xbox One, PS4 and PC later this year. The game is rated “E 10+” for everyone ages ten and up.