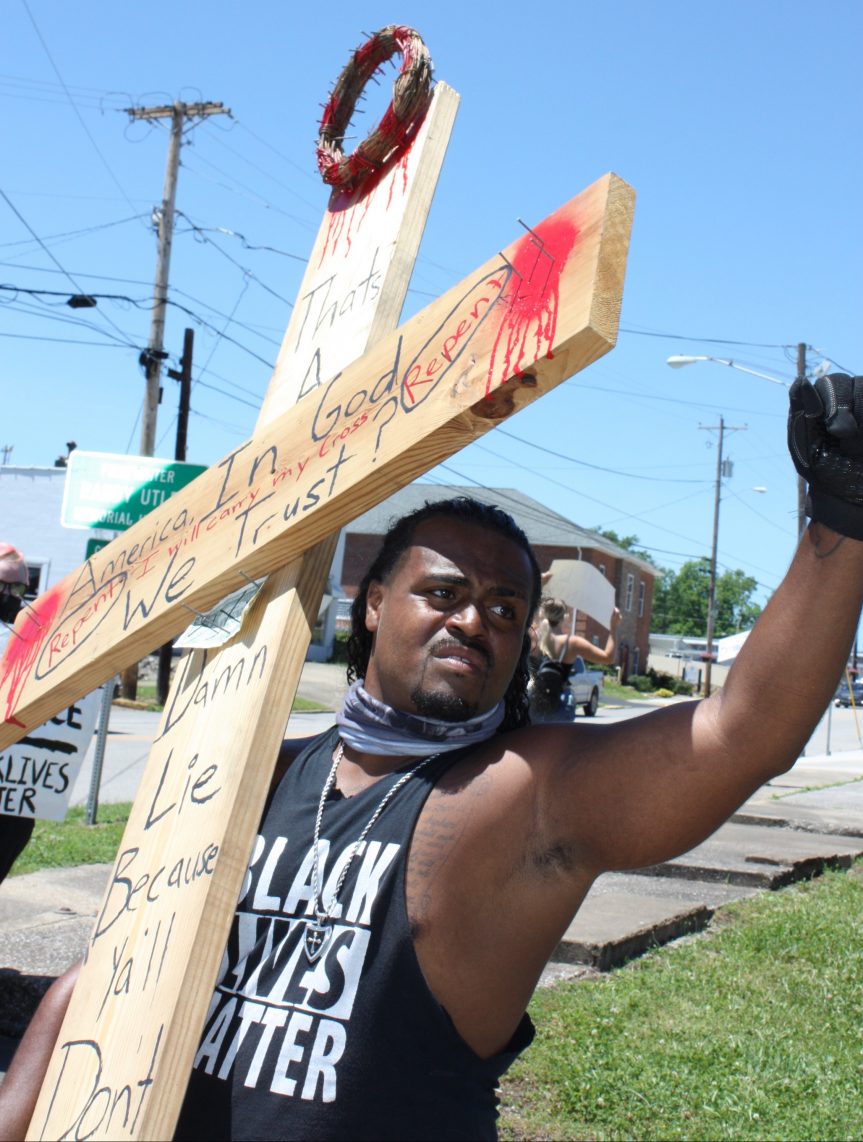 A Black Lives Matter (BLM) rally scheduled for Sunday in the City of Grayson has some on social media concerned about violence, looting, and rioting. Supporters of the rally, however, have noted that these BLM rallies have been ongoing since early June, with no violence or problems so far.

Concerns began circulating on social media last week, after the organizer of the rally, KCU student Dee Garrett, posted a video to Facebook where he said he would not “back down” in the face of racists and personal attacks.

Many of the personal attacks centered around Garrett’s criminal record, which the ministry student has been open about. Garrett, who was born in 1992, has stated that his listing on the sexual offender registry results from an incident that occurred when he was 15-years-old and the female involved was 12-years-old. A search of the Ohio public records confirms that Garrett was indeed 15-years-old when the incidents in question took place, between June and September of 2007, and that the person he had contact with was “less than thirteen years of age.” The offense Garrett was required to register for was “gross sexual imposition” which Ohio law defines as, “any touching of an erogenous zone of another, including without limitation the thigh, genitals, buttock, pubic region, or, if the person is a female, a breast, for the purpose of sexually arousing or gratifying either person.”

Garrett also served four years in prison for a third degree felony robbery. He has said his faith allowed him to turn his life around, and he is now studying to be a minister.

Garrett’s Facebook profile has since been deleted or archived, and the page and the videos are no longer available. The initial concern, however, was enough to encourage locals who self-identify with the militia group the Three Percenters to begin organizing a counter-protest. Some of those who claim to be affiliated with that group have asked, in social media posts, for counter-protesters to bring hand guns instead of long guns to the event.

Others on social media are asking for citizens to allow the Carter County Sheriff’s Department and the Grayson Police Department to handle security, and asking for donations of water, sports drinks, and snacks for officers who will be handling the event.

The Grayson Police Department, on Thursday afternoon, posted the verbiage of Grayson’s Special Event ordinance, ordinance 2018-02, which requires groups planning rallies, events, or parades to obtain a permit from the city for the event. While some thought this might be sufficient to stop the planned Sunday rally before it begins, city attorney Jason Greer said this ordinance does not apply to political or social rallies which are protected speech under the First Amendment.

“The Ordinance does not restrict matters protected by the First Amendment, which would include protests or matters of public speech,” Greer wrote in a response to questions from the Times. “This ordinance is geared toward public events that may utilize city streets, i.e. parades, 5Ks, etc. So I would say that a political or social demonstration falls under a different category than a festival or something of that nature.”

Greer said while the ordinance in questions cannot be used by the police to stop political protests, there are other measures police could take if the rally begins to get out of hand.

“Yes, police will break up a protest when there is a clear and present danger that is an immediate threat to public safety,” Greer said. “They can also arrest those that are violating laws.”

Greer confirmed that this could include trespassing laws, if a landowner contacted the police on demonstrators.

“I suppose if the landowner didnt want them there, and they were on private property, that could be an option,” he said.

But, he noted, sidewalks surrounding those private parcels are still considered public property. As such, they must be open to political or social protests.

“There is a constitutional right to free speech on public places,” Greer said.

The Grayson Chamber of Commerce also released a statement on the planned rally, in response to concerns from chamber members and business owners who worried that their shops might be targeted by protesters.

“The  Grayson Police Department, (Carter County) Sherriff’s Department, Fire Department (and) Emergency Management are coordinating a plan to protect the peace during the protest to avoid any damage to persons or property,” Chamber president Michelle Wilhoit wrote in an email to Chamber members. “Travis Steele, interim Chief of Police, stated that the mission of the Grayson Police Department will be to provide the attendees and participants with a safe environment to exercise their Constitutional Rights. Personnel of the Grayson Police Department and Carter County Sherriff’s Department will be assigned to locations to ensure public safety for the duration of the event. Chief Steele has met with the organizer of the protest and is assured that it will be peaceful. However, there is a contingency plan in place should it escalate and become destructive or violent.”

Wilhoit also alerted Chamber members that Main Street, will be closed from Landsdowne to Carol Malone Boulevard beginning at 10 p.m. on Saturday, and any vehicles left parked on the road would be towed. She also noted that there will be a public address system set up for speakers, including the mother of slain Louisville EMT Breonna Taylor, who was shot in her bed by police serving a no-knock warrant on her address. The person they were seeking did not live with Taylor and was already in police custody at the time the warrant was served.

The Protest March is scheduled to begin at 2 p.m. on Sunday, in between Landsdowne and Carol Malone.

“The march will start on Main Street and move towards Prichard,” Wilhoit stated in her email to Chamber members. “They will (then) turn north onto Robert & Mary and then turn up Third Street towards the police station where they will (lie) down for (eight) minutes and 46 seconds, referencing George Floyd’s death. They will repeat this march (seven) times.”

The Carter County Times will be present at the Sunday rally and provide additional coverage at that time, as well as post updates to this story as they develop.