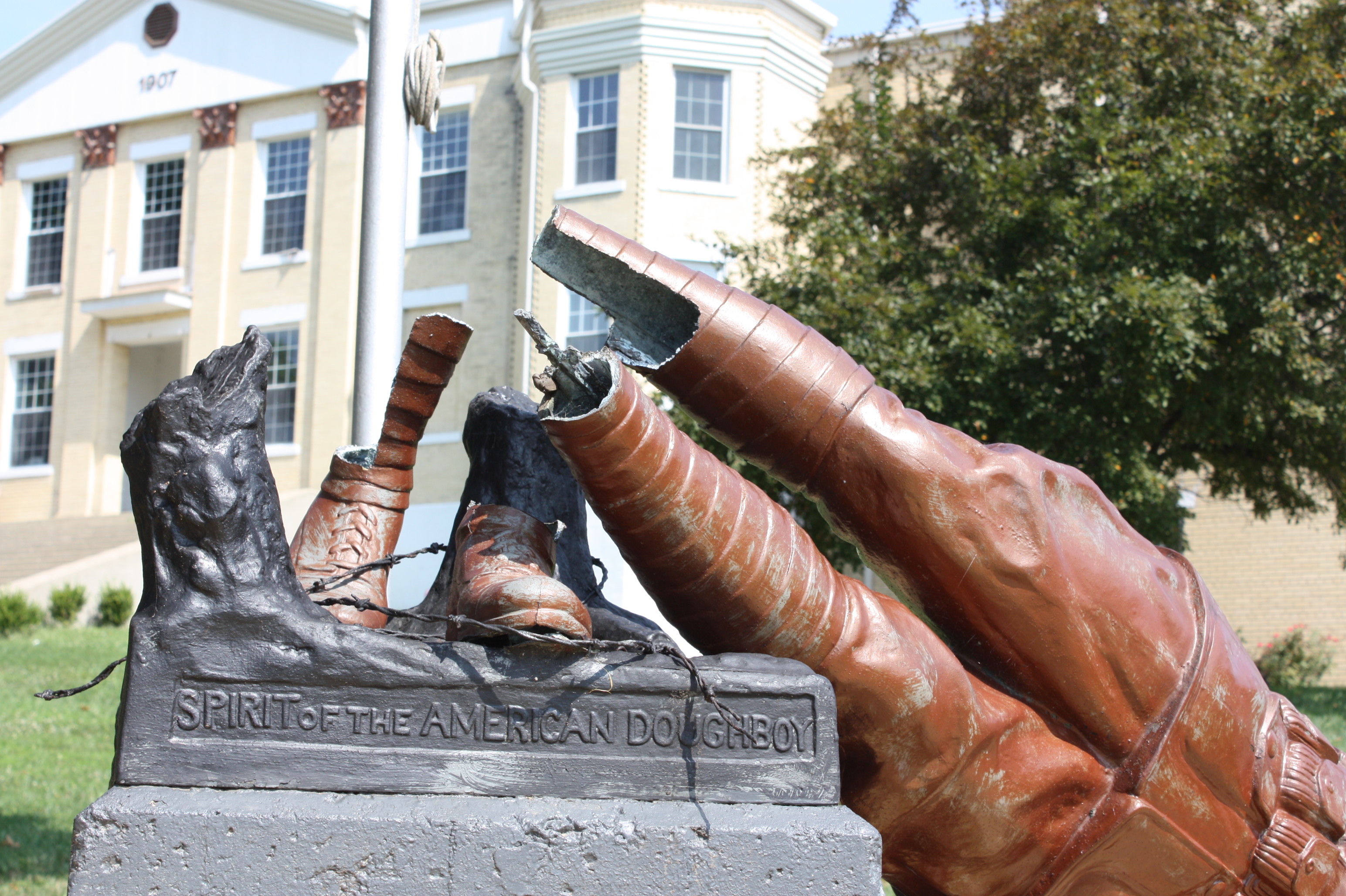 Grayson’s beloved doughboy statute came tumbling down on Thursday morning after beginning to lean heavily overnight. The support beneath his feet finally gave way and the apparent stress of the lean was enough to break the bronze support post inside and the zinc based statue’s cast skin, just above the ankles. Malone checked the base with a level and said it was only “half a bubble” off level along the front.

The WWI memorial statue, which sits on a concrete base on the lawn of the Carter County Courthouse, was already in need of rehabilitation though. Judge Executive Mike Malone sought, and was granted, approval to raise funds for the repair of the statute in September of last year. At that time the concern was on the rifle and the hands, which were showing the effects of their age. The brass plaques, listing the names of all those who served from the county, had also fallen off the wall below the statute. Those have since been replaced.

In October of last year, Malone said, he talked with a restoration specialist who explained that the process for preserving the statute included cutting it in half, placing a stainless steel support structure inside, and welding the halves back together. The cost for that process was “pricey,” Malone said, coming in at $30,784.00, and that was before the current damage.

The assessment from McKay Lodge Conservation Laboratory that came along with the $30,000+ estimate noted that “the figure (was) leaning slightly to its proper left.” It noted at the time that though the leaning was due in part to a slightly unlevel concrete base, it was “also because the metal base has partially collapsed under the weight of the figure.”

That collapsing base appears to be what finally caused the statue to break and topple over.

The report also noted that the cast zinc the statue is made of can suffer from brittleness and, “overtime, many historic cast zinc sculptures cannot support their own weight, causing them to collapse or ‘creep’ which leads to deformation and cracking.”

Malone called out road crews to evaluate the situation and come up with a plan for removing the stature. Malone said the statue would be stored at the road department building until it could be repaired and returned to the lawn.

The current memorial sits up on the hill, with elevations and slopes that could be difficult for the elderly or infirm. Malone said he would like to see the area leveled, with a depression cut out and retaining wall built behind it, so the memorial display is accessible without climbing a hill.