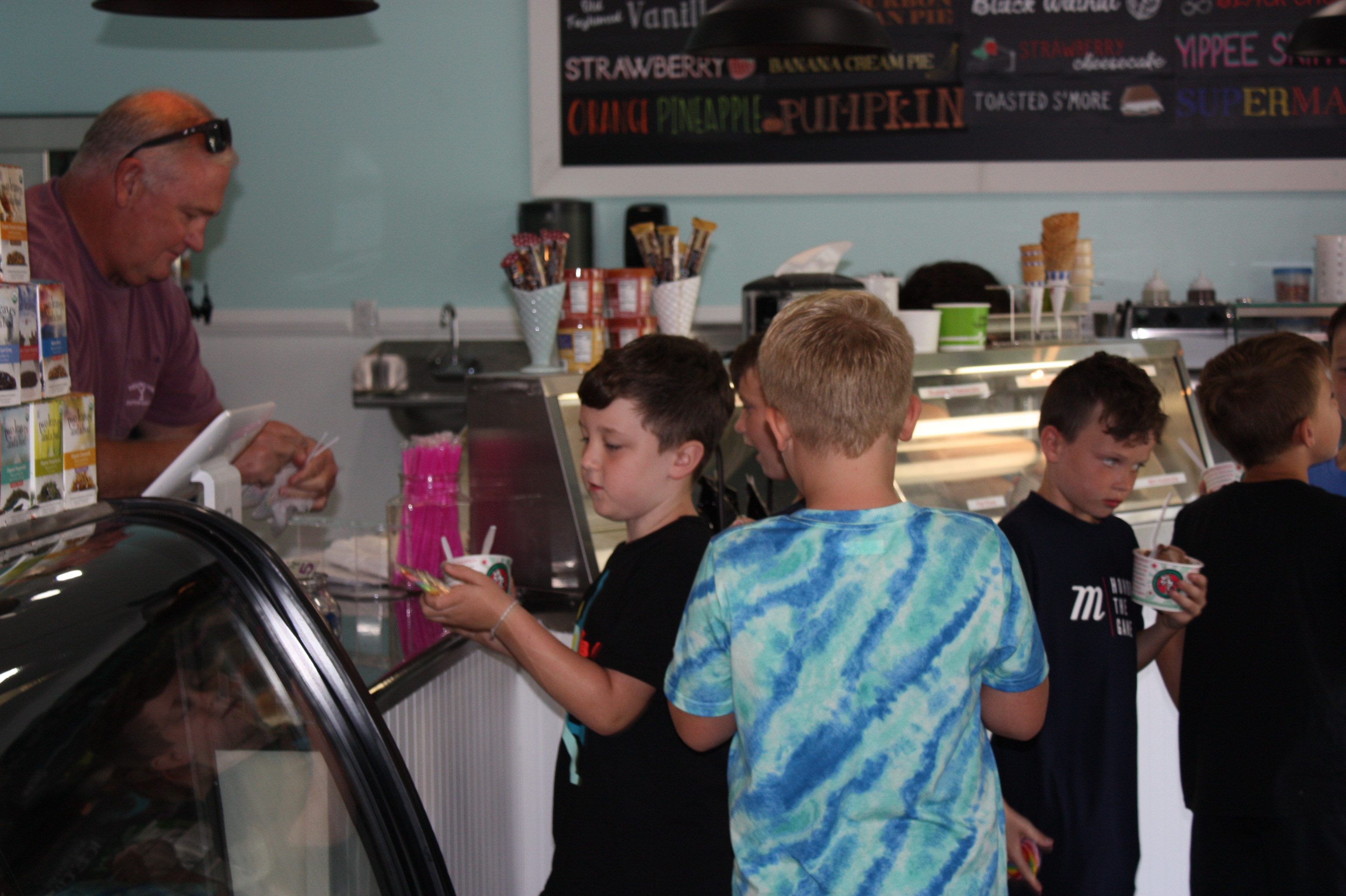 It’s a random Friday afternoon, and Sweet Life is packed with excited kids, waiting for their ice cream.

“This is what it’s all about,” owner Steve Sharp says over the chatter, grinning broadly and excusing himself from our interview to hand out giant, all-day suckers to the youngsters.

It’s pretty hopping for a place that hasn’t even held their grand opening yet, but Sharp – who runs the shop with his wife Ruth – said they’ve had that kind of community support since their soft opening.

His son had an out of town event that day, but they had to postpone their departure when they drove by the shop and saw that the line went out the door and down the sidewalk. Instead, it was an “all hands on deck” situation until everyone was served.

While they don’t have that sort of “out the door” line everyday – much to the relief of their regular customers, we imagine – they’re doing a steady business already offering locally sourced baked goods and locally roasted coffees and coffee drinks in addition to their ridiculous variety of fantastic ice cream flavors.

They already knew ice cream. They’d taken over Daddy-Yo’s three years previously, Ruth explained, but they wanted to expand it to offer more than just frozen treats. They also wanted it to be someplace where the community could more comfortably gather, so they decided to move it to the current location, on Main Street, and change the name. Thus, Sweet Life was born.

He said they already have a lot of pastors that come in and have coffee while working on their sermons, or meet with their congregation members in the shop.

He said they wanted to give Grayson, “something of a get away,” so it’s laid out and painted to feel like you’re on vacation in a small beach bungalow, with calming, cool colors and simple but classic designs.

Supporting local producers and artisans was also important to the Sharps, so they work with local bakers for all the goods offered in the store.

“We’ve got our own in-house bakers that work seven days a week,” Steve said. But they also want to bring in other local bakers to feature their goods.

“We currently have four or five ladies that are from the community, some have their own businesses, and some who just love to bake,” Ruth said.

“We have Andre Porter, Raised Right cinnamon rolls,” Steve continued. “We have Monica Carper, she does all of our cupcakes, Brooke Williams, she does cheesecakes, Amanda Puckett, she works our bistro and does our coffee, but also does our fudge, does our zucchini breads, (and) Emily Johnson does specialty cookies.”

They also source their coffee from three different local roasters. They’re available to order by the cup, in coffee drinks (their espresso roast comes from Silver Bridge), or by the bag for brewing at home.

“We offer three different local coffees,” Steve said. “Goose Bridle, of course, from Grayson. We offer Silver Bridge, which does our in-house coffee, out of Gallipolis, Ohio. Then we offer Baxter’s out of Somerset, Kentucky. We wanted to feature local businesses, again, and try to support our tri-state area.”

The ice cream is the only thing, in fact, that isn’t locally sourced. The Sharps have it flown in from Wisconsin’s Chocolate Factory, which regularly ranks among the top ice cream producers in the Dairy State. It’s a rich, full flavored product, and it’s worth the extra expense and shipping costs, Steve said. His customers seem to agree. He said he’s had to purchase five floor freezers, and keeps the two display freezers full beneath the display as well, and he still can’t keep enough ice cream on hand to fully keep up with demand.

“I think I’ve bought every freezer in Grayson,” he joked.

But, watching the kids from the birthday party pile back into the van after their ice cream, he says the time and energy has been worthwhile. He has more plans for the shop in the future, including more outdoor seating, and hopes they can be a fixture in the lives of the Grayson community and families for years to come.

Like he said when the rambunctious kids first came pouring through the door, “This is what it’s all about.”