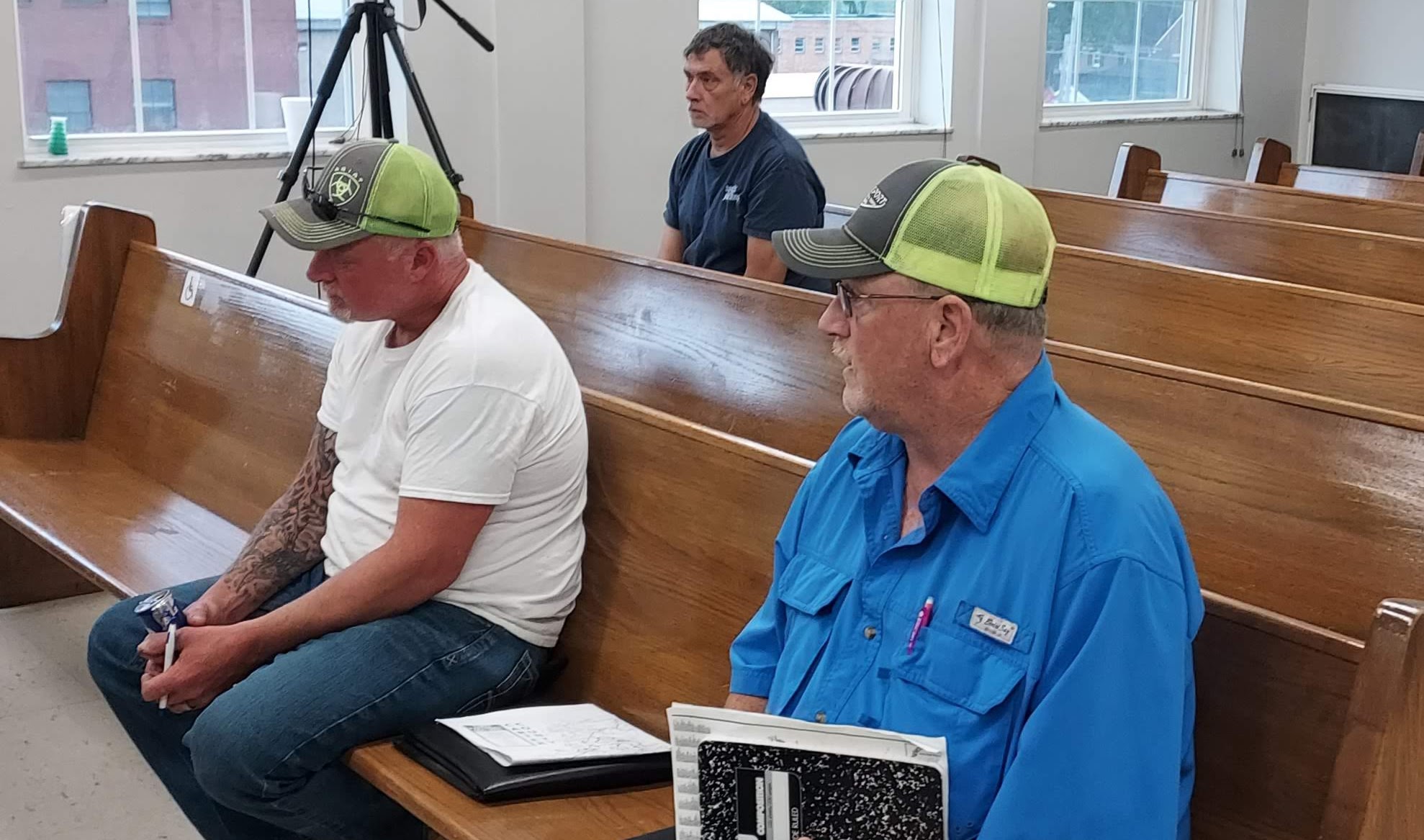 County officials and residents aren’t very happy with the ice storm cleanup from contractor Southern Disaster Recovery (SDR), so fiscal court scheduled a special meeting to discuss this issue with the company on Monday of this week – a meeting that representatives of the contractor didn’t bother to attend.

That absence didn’t stop the fiscal court from taking action, however. The court moved to adopt a resolution giving the company one work week to perform to the satisfaction of county agents John McDavid and Scott Greenhill, or they would move to terminate their contract with the company and find someone else to complete the work.

McDavid and Greenhill, who serve as county employees working as liaisons between the company and fiscal court, gave the court an update on SDR’s progress. They also related their frustrations with getting the company to properly clean up problem areas and criticisms of how the company works within the letter, if not the spirit, of FEMA guidelines.

The duo explained that the company divided the county into 19 zones, with seven of those zones completely or mostly cleaned up so far. The other twelve zones are in various states of progress, with the western end of the county – districts under the direction of Greenhill – least touched. McDavid and Greenhill said this was not at the direction of anyone in the county or either of them. In fact, McDavid said he had been suggesting moving more crews from his zones to the western end of the county. SDR, they said, has countered that they have a plan for cleaning up in the most efficient manner, which doesn’t always mean completely cleaning an area before picking up a load in another area to fill a truck and then offload the debris. While McDavid and Greenhill said there may be a method to their system, the result for them is upset residents when a road is partially cleaned and then seemingly abandoned. Debris that has been left in hayfields have stalled mowing efforts, or continue to obscure views along roadways, Greenhill explained. He said he has told the company that – on his end of the county – he would like them to start on the Rowan County line and work eastward along each road, completely cleaning each roadway as they come. He hasn’t gotten the response he wants, however, and it has led to strong words between himself and representatives of the company – some of whom have been reassigned following Greenhill’s complaints.

In one instance Greenhill called a representative a liar after he repeatedly inquired about several problem roads and was told they would be taken care of. Greenhill said he hasn’t heard from that individual since the confrontation and the company has still, “not cleaned one complaint road.”

One of the problems that Greenhill and McDavid reported was related to the way the company “milks” the FEMA billing system. Since FEMA pays by the cubic yard, rather than by tonnage, they explained, this gives SDR more incentive to pick up smaller material with more branches and to leave larger logs behind. One reason is because they don’t provide as much volume for their weight as brush. But another reason, they noted, is because heavy logs placed on top of brush compacts that brush – leading to less cubic yardage.

Despite this, FEMA also pays more for the cutting of larger logs, based on the diameter of the log. This, they said, seems to have encouraged SDR employees to cut larger trees – possibly even some that didn’t need cutting – that the company is then hesitant to haul off immediately because of the compacting and tonnage issues.

“If the tree is falling on the landowner instead of the road, it wasn’t endangering the road,” road supervisor Jason Carroll said of the trees that have been cut and left in hayfields and on other private property.

Judge Executive Mike Malone said there had clearly been communication problems, which was one reason why the court had called the special meeting and asked representatives of SDR to attend. He asked McDavid and Greenhill to compile a list of roads that still need work, and the order they want them completed in. The court said they would then reconvene after the Memorial Day holiday to determine if the company were performing to the agents’ standards or if the county would terminate their contract.

One of the areas that Greenhill and McDavid said they would be focused on, and have already asked SDR to focus on, are cemetery roads. The county needs those roads open for those visiting and decorating grave sites over the Memorial Day weekend.

Another area that McDavid wants to focus on next is stump removal. While he acknowledged that stump removal would be the last thing to do, after cleaning up all limbs, logs, and other debris, he said he wants to know what SDR’s plans are for dealing with the stumps.

“Stumps will be the last in line, but we need a plan now,” McDavid said. “Because ‘We’ll get them,’ is not an answer.”

The reason he’s thinking ahead, he explained, is because he wants the job done right.

“The one goal of me and Scotty has been to get this county cleaned up,” McDavid said.

Greenhill added that unlike SDR, who would move on to another community, he and McDavid live here. They care about cleaning up the mess correctly and they care about taking care of their neighbors, he said, and don’t want to be made into liars because of the company’s inattention to detail.

In other action the court moved to approve claims and transfers, entered into the first reading of the 2021-2022 budget, approved FADE contracts for the interim period of July to September of 2021 and for the new FADE fiscal year of October 1, 2021 – September 30, 2022, and approved the payment of reoccurring monthly bills.