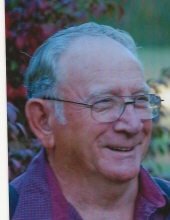 Donald was born on Tuesday, December 10, 1935 in Carter County, Kentucky to the late Arnold Jessie and Mary Magdeline Eden Jessie.

Donald retired from Bass Hawk Boat Factory. He was a member of Dry Branch Church of God, Donald loved going to church, helping folks, gardening, using his chainsaw and spending time with his family and friends, especially his grandchildren.

In addition to his parents, Donald is preceded in death by his first wife of 41 years, Mary Susan Warner Jessie. Two brothers, Willis Jessie and Floyd Jessie. One grandson, Austin Jessie.

Due to COVID-19 regulations, we ask that everyone wear a mask and practice social distancing.